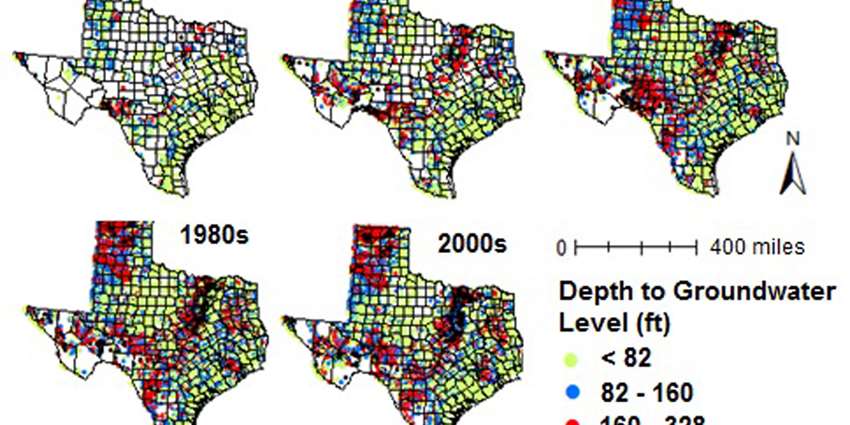 It’s no secret that groundwater levels have declined across the state over the past eight decades and that the primary reason was the onset of irrigation in agriculture and population growth. But a recent Texas A&M AgriLife Research study has identified other factors having an impact.

The groundwater declines have been most severe in the past four decades, but the news isn’t all bad, according to Dr. Srinivasulu Ale, AgriLife Research geospatial hydrology assistant professor in Vernon.

“Long-term (1930–2010) trends in groundwater levels in Texas: Influences of soils, land cover and water use,” authored by Dr. Sriroop Chaudhuri, former post-doctoral research associate at Vernon, and Ale, was published in the Science of the Total Environment journal recently.

They used the boundaries of the Texas Water Development Board’s designated Groundwater Management Areas, or GMAs, for their assessment. The 16 GMAs, with boundaries identified in response to legislation passed in 2001, include all major and minor aquifers in the state. The objective behind GMA identification is to delineate areas considered suitable for management of groundwater resources.

“Our results indicated a progressive decline in statewide decadal median water levels in Texas from about 46 feet to 118 feet between the 1930s and 2000s,” Chaudhuri said. “We identified hot spots of deep water levels in GMA 8 (North Central Texas) and the Texas Panhandle regions since the 1960s, mainly due to extensive groundwater withdrawals for urban and irrigation purposes, respectively.”

“We know irrigated agriculture is the major cause of depletion in the Texas Panhandle, as compared to increasing urbanization in GMA 8,” Chaudhuri said. “We saw a significant drop in median groundwater levels in irrigation wells from 75 to 180 feet between the 1940s and 1950s in the Texas Panhandle, coinciding with the initiation of widespread irrigated agricultural practices.”

But he said they knew there was more to the decline than just these uses, because “unused” wells monitored across the state throughout the decades were also showing varying levels of decline. That was when they studied groundwater and surface-water use patterns, soil characteristics, geology and land cover types to better understand the water-level changes in Texas.

The leveling off of the decline has been seen in the past decade after the implementation of the GMAs and the guidelines and regulations that were established with them, he said. Increased use of surface water and assessment of water levels are some measures being used to address groundwater depletion issues in the Houston, GMA 14, and Dallas, GMA 8, areas.

However, these voluntary conservation or regulatory strategies have resulted in a variable pattern of recovery in ambient water-levels, which are still occurring frequently at deeper depths in the hot spots and thus warrant further investigation, he said.

Ale said the need for more spatially intensive and frequent water-level monitoring has been realized over the course of this study. In addition, further investigation of aquifer-specific influences such as groundwater recharge and flow paths, human dimensions on water-level fluctuations and climate are warranted.