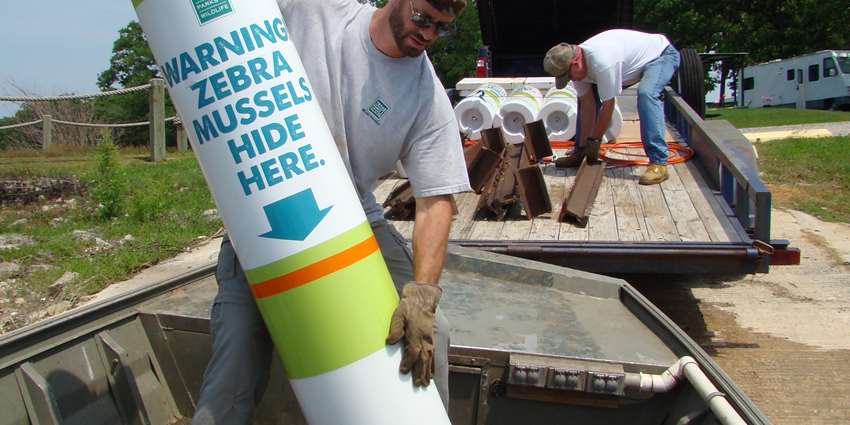 The Texas Parks and Wildlife Commission has approved a new regulation requiring that all boats operating on public fresh water anywhere in Texas be drained before leaving or approaching a lake or river to help combat the further spread of zebra mussels and other invasive species.

With the destructive invasive species having spread to Lake Belton, conservation officials and water-supply agencies are very concerned that zebra mussels could expand their range throughout the state, including Lake Travis and the other Highland Lakes.

“Zebra mussels have been moving steadily deeper into Texas since they were first found in Lake Texoma in 2009,” says Brian Van Zee, the Texas Parks and Wildlife Department (TPWD) Inland Fisheries Division regional director who has spearheaded the agency’s response to zebra mussels in Texas. “Now that they are in Lake Belton, the Highland Lakes are in the crosshairs as are many of the public waters in Central Texas.”

“So far we haven’t seen any evidence of zebra mussels,” Cowan said. “We will continue working closely with Texas Parks and Wildlife in urging the public to help us keep zebra mussels out of the Highland Lakes. The mussels not only are a nuisance, but they could pose serious operational problems for the dams, water intake structures and the general health of the lakes.”

While the new measure won’t take effect until July 1, TPWD urges all boaters to begin the preventative practice immediately since microscopic larvae (called veligers) hiding in boats can travel to another water body and cause a new zebra mussel infestation.

Currently in effect in 47 North and Central Texas counties, the new rule requires persons leaving or approaching public water to drain all water from their vessels and on-board receptacles. This applies to all types and sizes of boats whether powered or not, personal watercraft, sailboats, kayaks/canoes, or any other vessel used on public waters.

“The way to comply with this requirement is simple,” Van Zee said. “All you have to do is clean, drain and dry your boat. This is critical, because in their initial state, zebra mussels are invisible to the naked eye.”

The soon-to-be statewide rule is similar to those in other states impacted by zebra mussels. Because trailered boats tend to be the most likely way zebra mussels get from one water body to another and boaters in Texas travel throughout the state to engage in various forms of recreational activity, from skiing to fishing, the rule has been made statewide, according to TPWD.

The regulation also requires the draining of live wells, bilges, motors and any other receptacles or water-intake systems in contact with public waters. More details, including where water-draining regulations are currently in effect, is online at www.texasinvasives.org/zebramussels.