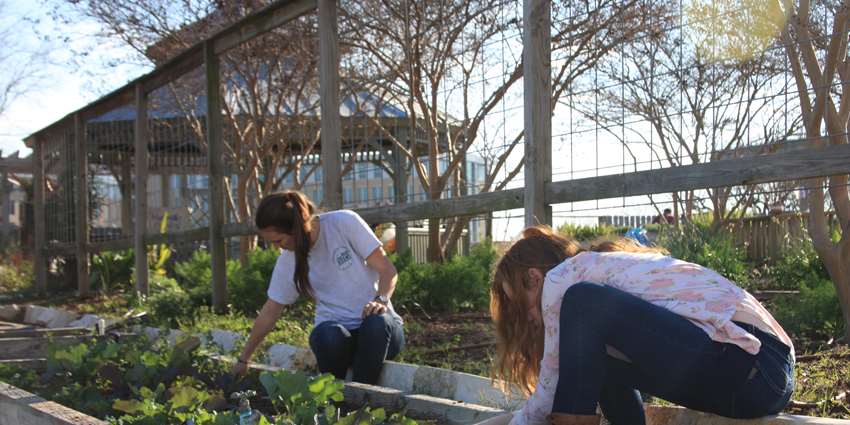 A quick look around Texas A&M University is all you need to see that the campus and the surrounding community are becoming more urbanized. But, this is not necessarily at odds with Texas A&M’s history as an agricultural college. A growing on-campus farming venture is linking Texas A&M’s agricultural heritage to today’s Aggieland, while adopting a forward-thinking perspective on sustainability, said Howdy Farm president Jessica Newman.

Howdy Farm is a student-run community garden at Texas A&M that implements sustainable practices to grow organic produce on campus. The land that the farm uses is part of the Department of Horticultural Sciences, and Howdy Farm is overseen by the Sustainable Agriculture Student Association.

Howdy Farm grows a wider variety of plants than is typically found in grocery stores, some of which are native to Texas, Newman said. Recently, the farm started planting edible weeds, such as purslane and amaranth. Newman said the plants offer a great learning opportunity, exposing people to plants that they are unfamiliar with.

The farm also takes every opportunity it can to reduce, reuse and recycle, which can mean more work than traditional gardening. “We do encounter some people who think that what we do is going way too far out of the way to farm, but we don’t mind,” said Corey Wahl, Howdy Farm’s head field manager.

In the midst of the Texas drought, Howdy Farm recognizes the importance of water conservation. The farm is home to three rainwater collection tanks that can hold a total of 2,000 gallons.

Additionally, the farm is working on implementing a wicking bed that waters plants from the bottom up. Rather than planting the soil directly into the bed, a liner is placed into the bed, followed by rocks and then soil. A PVC pipe filters water into the bed, creating a mini-aquifer. Another pipe drains excess water to ensure that plants are not overwatered on especially rainy days.

Not only does the wicking bed allow the roots to grow deeper and steady the plant, it also lets the soil retain more water. “If it works really well, we could use it on other beds,” Wahl said.

Howdy Farm’s stewardship practices go beyond water conservation. The farm also uses solar panels to power its tools and compost in its gardens. Designed and created by the Austin-based construction firm Reclaimed Space and funded through an Aggie Green Fund grant, the farm’s main building was created from reclaimed and repurposed materials, such as a 100-year-old barn wall.

Howdy Farm plans to visit schools and has opened up the garden to tours for elementary school children. During tours, children were allowed to pick produce they could take home with them. “You can tell them about anything, and they’re interested,” Wahl said. “They like to try eating different things.”These sustainable gardening methods are not something Howdy Farm keeps to itself. The farm provides a number of educational opportunities for students and the community and hopes to expand these educational programs in the future by offering monthly classes on subjects such as compost and growing herbs.

Looking to the future, Howdy Farm is expanding, as construction of the Gardens and Greenway project begins next to it. Wahl said he expects that the project will bring more foot traffic through Howdy Farm. The farm is working on adding fruit trees and creating in-ground beds in addition to their raised beds.

“Every student that comes through here adds a little piece to it and builds into one big thing rather than trying to do it all at once,” Wahl said.

Howdy Farm sells its produce at its location on west campus on Thursdays from noon to 5 p.m. Funds from the sales are used to keep the farm running. Also, student volunteer hours are 1 p.m. to 5 p.m. on Wednesdays and Fridays.