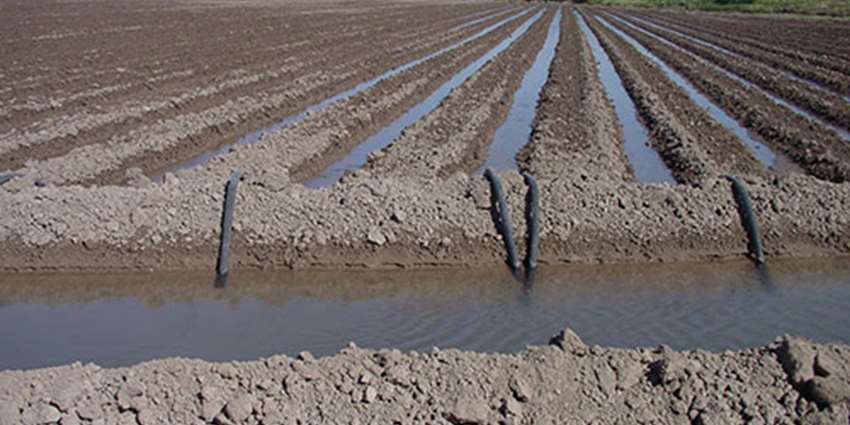 The Lower Rio Grande Valley Water Improvement Initiative is being funded through the Regional Conservation Partnership Program (RCPP), a new program authorized by the 2014 Farm Bill.

NRCS State Conservationist Salvador Salinas announced the new initiative, along with another Texas RCCP project, at a Jan. 15 news conference in College Station. These projects are two of more than 115 high-impact projects across all 50 states that will receive more than $370 million as part of this new RCPP effort, according to NRCS.

Dr. Kevin Wagner, TWRI associate director, said project partners will work together to improve management of nutrients and irrigation water in Valley. (Watch the interview with Wagner about the new initiative.)

“The Lower Rio Grande Valley is experiencing significant population growth, putting greater pressure on the limited water supplies and increasing the need for improved agricultural water use efficiency,” Wagner said at the news conference. “Between 2010 and 2060, population in the region is expected to grow 142 percent. According to the 2012 Rio Grande Regional Water Plan, an additional supply of 610,000 acre-feet per year will be needed by 2060 to support the growing population in the Lower Rio Grande Valley.

Along with the limited supplies for the increased population, degraded water quality, particularly from nutrients, necessitates improved nutrient management and reductions in runoff through irrigation return flows, Wagner said. “Although addressing water quantity is the primary concern, the importance of water quality and quantity are inseparable and intricately linked in the Valley.”

“Algal blooms in the tidal segment of the Arroyo are common in the spring and summer with wide daily swings in dissolved oxygen often accompanying these periods of high algal productivity,” he said. “A reduction in nutrients in the Arroyo Colorado is needed to help control excessive algal growth, improve dissolved oxygen levels and restore aquatic health in the arroyo’s zone of impairment.”

Wagner said the five-year project will address the Valley’s water quantity and quality concerns through improved irrigation delivery and scheduling, as well as innovative irrigation techniques and technologies.

According to NRCS, the initiative encompasses 1.59 million acres in Cameron, Hidalgo and Willacy counties and includes the lower Rio Grande, Arroyo Colorado and north Floodway.

“All these water bodies are important sources of freshwater inflows that ultimately reach the Gulf of Mexico,” Salinas said.

“Working through existing regional planning efforts, this initiative will provide additional technical and financial assistance to agricultural producers in the Valley supported by extensive outreach and education,” said Flores.

"This partnership allows for a strong and enhanced approach to addressing the water quantity and water quality challenges facing farmers and ranchers in the Lower Rio Grande Valley," Salinas said. "NRCS and partners working through RCPP projects will help in bringing new ideas and technologies to production agriculture in the Valley."

TWRI is also a collaborator on the only other state Regional Conservation Partnership Program project funded in Texas, the Texas Gulf Coast Stream and Wetland Initiative, led by the Resource Institute, Inc. That project focuses on the restoration and protection of headwater stream and wetland systems on cropland, grassland, rangeland and pastureland within a contiguous 54-county area that includes portions of six major rivers in the Texas Gulf Coast region, according to NRCS.