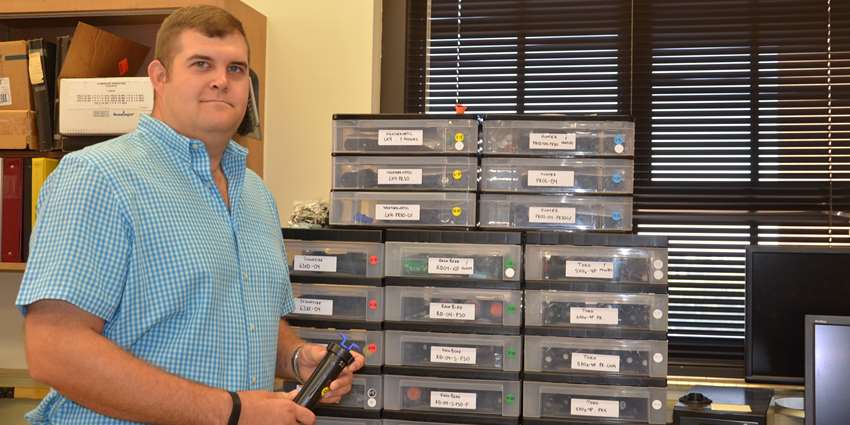 New lawn sprinklers have built-in pressure regulators, but how accurate are they?

Recently, the lab completed all the requirements to be certified by the International Code Council to test landscape irrigation products, he said. The Environmental Protection Agency (EPA) requires the certification for labs conducting WaterSense product testing for manufacturers.

“WaterSense is a partnership with EPA to protect the future of our nation’s water supply,” Swanson said. “They do this by offering people a simple way to use less water with water-efficient products, including new home designs and services.”

Products that earn the WaterSense label have to be at least 20 percent more efficient than similar products without sacrificing performance, he said. Now, WaterSense is starting to focus its attention on landscape irrigation by identifying products that can save consumers water.

Generally, more than half of municipal water supplies in the summer are used to irrigate outdoor landscapes, he said.

Though Swanson and Fipps have been testing “smart” irrigation controllers since 2009, it wasn’t until 2011 that the WaterSense program began testing and labeling them.

The lab certification will allow Swanson to work with manufacturers to test or retest their controllers for the WaterSense label.

“Controllers are not the only product being tested in our lab that can help consumers save water,” he said. “There are other newer technologies like soil-moisture sensors and pressure-regulated sprinklers that we’ll also be certified to test for the WaterSense label.”

As beneficial as smart controllers and soil-moisture sensors promise to be, if the irrigation system has poor coverage, then it will still not apply the correct amount of water, Swanson said.

Swanson and Fipps are currently testing 25 sprinklers from five manufacturers.

“The purpose of this phase of testing is to help the EPA WaterSense program determine the testing specifications and performance criteria for these sprinklers to earn the WaterSense label,” Fipps said.