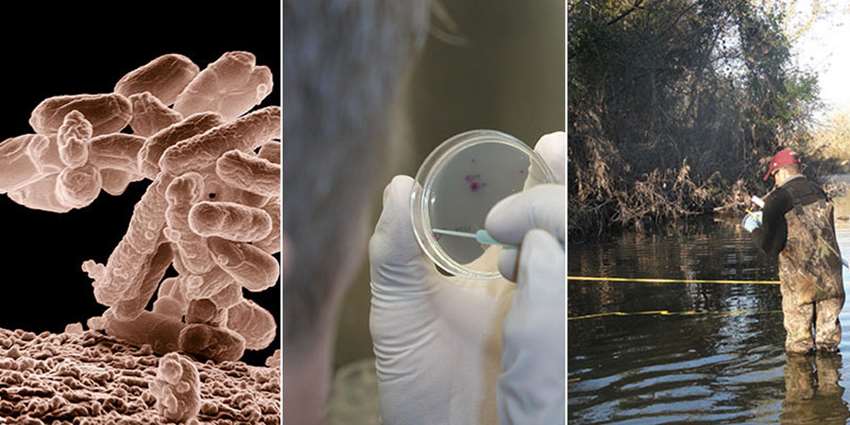 For more than a decade, the Texas Bacterial Source Tracking Program has improved the identification process for bacterial pollution sources in watersheds across Texas to help restore water quality and protect human health, according to a Texas Water Resources Institute (TWRI) official.

“As a result, we can now take more targeted and effective approaches to watershed restoration.”

The program is made up of a team of researchers, including Wagner, Dr. Terry Gentry of AgriLife Research’s department of soil and crops sciences, Dr. George Di Giovanni of the UTHealth School of Public Health in El Paso, Dr. Lucas Gregory of TWRI, and others. The Texas State Soil and Water Conservation Board has funded the program since its inception.

“The program has filled a need in the state’s water quality efforts that no other program was delivering, that of in-stream measurements of human and animal sources of bacterial pollution,” Wagner said.

He said identifying bacterial pollution is important because bacteria is the No. 1 pollutant of Texas water bodies, with 255 water bodies currently failing to meet water quality standards due to excessive levels of bacteria.

Bacterial source tracking, or BST, is an assessment tool that uses DNA fingerprinting and other genetic and phenotypic tests to differentiate between wildlife, pets, livestock or human sources of fecal bacteria, including E. coli, bacteroidales and enterococci, according to Di Giovanni.

“The premise is that DNA fingerprinting can identify source-specific bacterial strains that have adapted to the unique gut environments of different animal hosts,” he said.

Gregory, who has been involved in the collection of known source fecal samples and data assessment, said E. coli is the state’s indicator bacterium of choice for assessing the safety of fresh water for swimming and other recreation. Water samples with E. coli are cultured in a lab and analyzed using DNA fingerprinting. The researchers also DNA fingerprint E. coli collected from the predominant animal species in the watershed.

“Then, by comparing the two fingerprints, the sources of E. coli in that watershed can be identified,” Gregory said.

The researchers have found wildlife to be the largest source of E. coli in Texas rural watersheds tested to date, with feral hogs generally the first or second most commonly detected source of E. coli.

“The tendency of feral hogs to concentrate in riparian zones may exacerbate their impact in rural watersheds,” Gentry said.

“Livestock can also be substantial contributors of E. coli, but they generally have lower contributions than computer models estimate,” he said. “Agricultural best management practices, such as rotational grazing, riparian protection and providing alternative water supplies, can greatly decrease both livestock and wildlife contributions.”

Di Giovanni said the team’s findings have led to a better understanding of human health risks for recreation in rural water bodies impaired with bacteria from wildlife.

“Although wildlife feces may be a source of zoonotic pathogens, that is, those transmitted from animals to humans, generally speaking the risk to humans may be lower than exposure to water contaminated with human sewage,” he said.

Over the years, the team has expanded the number of animal species and regions represented in a statewide sampling library. Di Giovanni’s and Gentry’s labs oversee and maintain data and bacterial culture collections.

“But through the years, we have been able to allay those concerns by focusing on increasing application, capacity and coverage of bacterial source tracking resources available in the state,” he said. “In doing so, we have been able to accomplish several of the research and development needs recommended by a statewide task force on bacterial source tracking.”

Wagner said before BST many computer models attributed many of the bacterial contributions to cattle because this was one of the few sources for which there was sufficient data.

“But BST helped us confirm what many landowners suspected — that cattle were only part of the contributions; on average, cattle contribute about 13 percent of E. coli in the rural watersheds studied to date.”

The Texas Bacterial Source Tracking Program has been used in water restoration efforts in 14 watersheds, including Buck Creek, which was delisted from the state’s impaired water body list in 2010, Wagner said. Buck Creek’s restoration efforts were recognized as a success story by the U.S. Environmental Protection Agency and awarded a 2013 Texas Environmental Excellence Award.

DiGiovanni said segments of the Leon and South Leon Rivers were also delisted in 2014, due in part to management of pollution sources identified through the program.

“BST has been incredibly helpful in every watershed where we’ve used it,” Wagner said.

The BST research team won a 2007 Texas Environmental Excellence Award in Agriculture for its work, as well as the 2014 Texas A&M College of Agriculture and Life Sciences Dean’s Outstanding Achievement Award for Interdisciplinary Research.

“We’re really turning our attention to try to do more of this work in more urbanized settings,” he said. “In predominately rural watersheds, wildlife contributes about half of the bacteria. We’ll see if that differs in urban settings or not.”

For more information on the program, go to texasbst.tamu.edu.