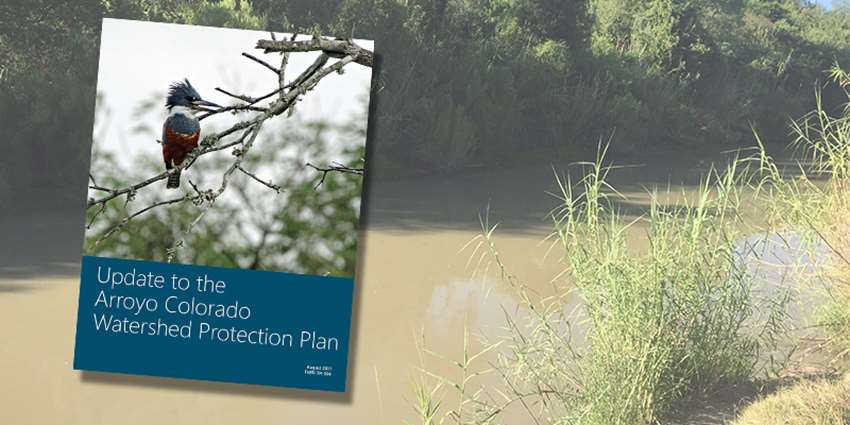 The updated plan was accepted as it met the agency’s national guidelines for watershed-based plans and effectively outlined a strategy to improve the watershed’s two water body segments impaired by bacteria and low dissolved oxygen (DO), said Jaime Flores, Texas A&M AgriLife Extension Service program coordinator for TWRI and the partnership’s watershed coordinator.

“The Arroyo Colorado Watershed Partnership has been working with local stakeholders and project partners for the last five years to conduct baseline monitoring, model best management practices and management measures, and complete the updated plan,” he said.

The Arroyo Colorado runs through the center of the Rio Grande Valley from Mission to Arroyo City and eventually flows out to the Lower Laguna Madre, an estuary and nursery for many fish and shrimp species.

The tidal segment of the watershed has been included on Texas’ list of impaired water bodies since 1978, due to periods of low DO levels. In addition, both the tidal and above-tidal segments are impaired by high levels of bacteria that exceed the state’s contact recreation standard.

Flores said the first Arroyo Colorado Watershed Protection Plan was published in 2007, with guidance measures to carry through 2015.

“But that was only the first phase of a long-term plan,” Flores said. “While great progress has been made in both urban and agricultural areas to reduce pollutant loads, we have not reached our goal of removing the Arroyo Colorado from the list of impaired water bodies. This updated plan will guide us in that effort.”

Dr. Jude Benavides, Arroyo Colorado Watershed Partnership and Steering Committee chairperson, said the updated plan reflects the progress made within the watershed since 2007 and outlines the next phase of efforts to improve the water quality

“This update represents the quintessential marathon effort,” said Benavides, an associate professor at the University of Texas Rio Grande Valley. “It is not the work of any one single individual. It is instead a direct outcome of the long-term commitment, continuous support and goal-oriented work of numerous individuals and organizations. We all look forward to helping put this plan into action in order to preserve and best manage the Arroyo Colorado for our current and future stakeholders.”

Dr. John Tracy, TWRI director, said those involved in the plan’s development are pleased with the EPA’s acceptance.

“Much work has gone into compiling the plan, and I believe it sets forth an effective approach to restoring the water quality in the Arroyo Colorado,” Tracy said.

Development of the updated plan was funded through a Clean Water Act grant to TWRI, administered by TCEQ from EPA.