The Brazos: Legacy of a Mighty River exhibit opens 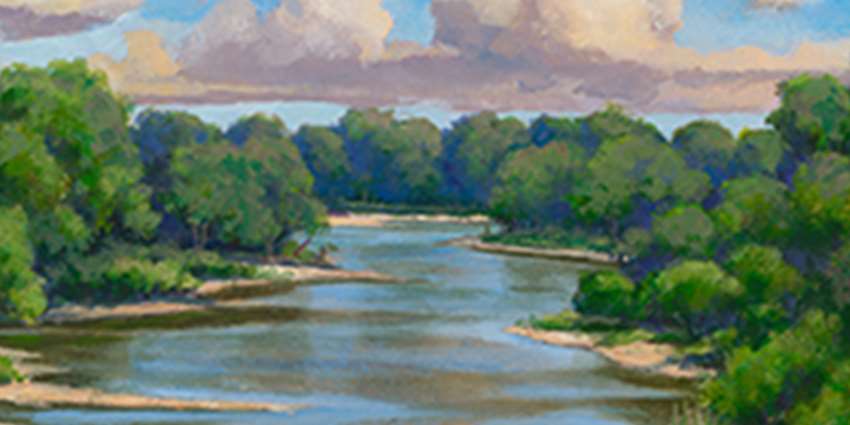 Can water, humans and animals coexist while competing for one resource? A new exhibit at the Brazos Valley Museum of Natural History dives into the competition and collaboration surrounding the Brazos River.

The exhibit, The Brazos: Legacy of a Mighty River, opened on June 29 with a lecture by Dr. Robert Mace, deputy executive director and chief water policy officer at the Meadows Center for Water and the Environment at Texas State University.

The exhibit celebrates the multi-faceted history of the Brazos River, through curated displays using the museum’s own specimens and those on loan from other sources. The history of the area, including the civilizations and animals supported by the river, are part of the exhibit.

Mace focused his informative and humorous lecture on three main points: early geologic history, why the river exists in its current state and water issues surrounding the region.

During the formation of the Rocky Mountains, runoff from the mountains created channels. These channels led to the formation of various water sources used today, such as the Ogallala Aquifer and the Brazos River. Over the years, the river has changed, but the sediments have remained in the area.

“If your spouse has been wanting to see the Rocky Mountains, here is what you do,” Mace said. “Take them out into the yard and say ‘Here we are! Isn’t it beautiful?’”

Although the Brazos should have been named as the Colorado, which is according to location, it was not, due mostly to its discovery, Mace said.

The river was named by early European explorers, who after seeing the river, called it the “brazos de los Dios” or “arms of God,” he said.

The lecture concluded with a reading from the novel, Goodbye to a River by John Graves, which Mace described as a wonderful read on the beauty of river ecosystems.

“A whole river…is all kinds of trees and grasses and all the breeds of animals, birds and men that pertain and have ever pertained to its changing shores…and the wide, flat, probably desolate place where it discharges itself into the salt of the sea,” read Mace from Graves’ book.

After the lecture, the floor was opened for questions from the audience. Most questions related to nearby reservoirs and their impacts to the water levels in the river. Also concern over erosion contributing to river bank loss and sediment withholding in reservoirs were floated to Mace.

Although erosion is a problem, one audience member indicated that it is not always bad. He worked with a property owner who had about half an acre of river bank property, but after years of sediment deposition, now has around nine acres.

“We lose a lot of land because of the sediment held back by reservoirs, but we also gain a lot when a flood happens,” added another audience member.

Mace also answered questions about floodwater capture and indicated underground storage was a possible solution being discussed in the Texas Legislature. He emphasized the use of onsite water and how vital this could be to conserving water in the future.

“Why not use water you have locally to meet your needs?” Mace questioned.

The exhibit runs from June 29–Oct. 27 at the Brazos Valley Museum of Natural History.

Find information about tickets and hours on its website.

Alexandra was a graduate communications intern for the Texas Water Resources Institute, providing assistance to the communications team with the institutes’ publications, including Conservation Matters and txH2O magazine.