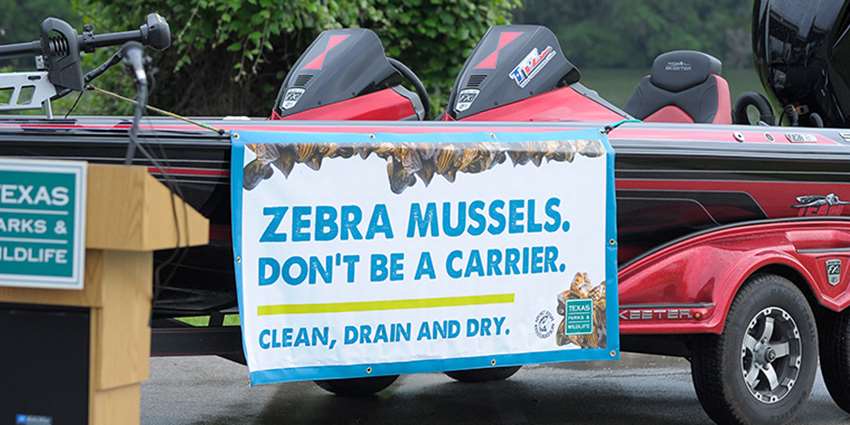 Is your boat carrying microscopic hitchhikers that will infest water bodies?

Taking the boat to the lake is a great way to beat the heat, but zebra mussels can ruin the fun. The Texas Parks and Wildlife Department (TPWD) has a campaign to raise awareness of this invasive aquatic species and to remind boat users to clean, drain and dry their boat, trailer and gear.

This small, destructive species hitches rides on boats and trailers that were not thoroughly cleaned, drained and dried after leaving infested lakes and rivers. From one water body to another, zebra mussel infestations cause massive amounts of economic, recreational and environmental damage.

Zebra mussels are about 1-1.5 inches long and have a distinctive zebra-striped, triangular shell with ridges, and they live in a freshwater environment. Like any typical invasive species, they grow, mature and reproduce rapidly producing up to one million microscopic larvae per year, according to the Texas Invasive Plant and Pest Council.

Zebra mussels are small shellfish that can spread rapidly once introduced into a body of water.
Photo credit: USGS

At TPWD, Monica McGarrity is the aquatic invasive species team leader. In June, McGarrity was a speaker at an event by the Colorado River Alliance (CRA) titled Zebra Mussels in the Texas Colorado River: Status, Threats, and Potential Solutions.

“One boat alone could move zebra mussels and infest an entire living water body,” said McGarrity during the CRA event. She encouraged people to be good lake stewards, recommending practices to reduce the spread of zebra mussels.

The zebra mussel invasion into the United States began in the late 1980s. They are native to Eurasia but first invaded the Great Lakes region and spread to numerous states via the Mississippi waterway, then traveling by boat and trailer as far west as California. Zebra mussels can survive for days trapped in the water held inside of a boat.

Currently in Texas, there are 14 lakes in five different river basins infested with zebra mussels. Other lakes and rivers have tested positive but are not yet categorized as “infested” and more are suspected, according to TPWD.

Economically, zebra mussels cause the most damage once they start attaching to surfaces such as boat parts, water pipes and docks. When they attach to boats, it could be on or in the motor, causing damage. They also threaten water supplies by clogging water intakes, cutting off private and municipal water sources.

Environmentally, one zebra mussel can filter one liter of water per day, which increases water temperatures. Zebra mussels are also competition for other forage species, damaging lake ecology and affecting fish populations. Their ability to attach to most surfaces also smothers native mussels, taking over their habitat.

Once they exist in a water body, it is infected with no cure for removal.

“Prevention is really the only tool we have to combat zebra mussels because once they are in a lake, there is no silver bullet. There is mitigation that can be done to reduce impacts but nothing you can do to get rid of them,” McGarrity said.

Monitoring methods include shoreline surveys and sampling for larvae and mature zebra mussels capable of reproducing. McGarrity said the goal is management, not eradication.

Educating others about this invasive species to raise awareness, and maintaining vessels used in freshwater is important to prevent the spread of zebra mussels.

“It is important to have routine boat maintenance,” McGarrity said. “Avoid keeping items in zebra mussel-infested waters for extended periods.”

She said boats should be professionally decontaminated: water must be drained out of boats, trailers, and gear; any vegetation should be removed; and boats should be dried before entering or leaving a water body.

According to the Texas Invasives website, if you are unable to let a boat dry for at least a week, wash it with a high-pressure washer and hot (at least 140-degree), soapy water. This applies to any size vessel used in freshwaters. Watch a video about how to clean, drain and dry your boat, trailer and gear.

For a list of zebra mussel-infested lakes and rivers in Texas, as well as more facts about zebra mussels and how to report a sighting, visit the Texas Invasives website.