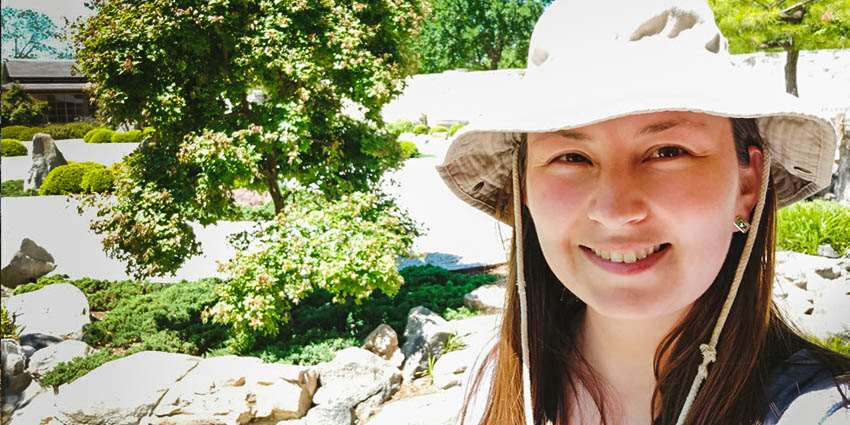 When Laura Rodriguez Lozada was a child, she loved taking things apart. She would distill things down to their basic components and figure out how to piece them back together.

“I liked to open up electric toy cars and clocks. After putting them back together, I would go to my father and say, ‘I have enough parts to build another clock!’” Rodriguez said. “The cars and clocks were puzzles.”

Originally from Colombia, Rodriguez is a graduate student at Texas A&M University and a graduate research assistant at Texas Water Resources Institute (TWRI), where she has worked since 2016 on the Transboundary Aquifer Assessment Program (TAAP).

TAAP is a U.S. Geological Survey project that was created by the U.S.-Mexico Transboundary Aquifer Assessment Act of 2006 to conduct binational scientific research on transboundary aquifers and address water issues in border communities. Rodriguez’s master’s thesis, which is about the Allende-Piedras Negras Aquifer, is based on her TAAP work.

Before coming to TWRI, Rodriguez received her bachelor’s degree in geology from the National University of Colombia. After graduating, she worked for an oil company doing seismic acquisition, which uses vibrations from heavy truck-mounted vibration devices to create images of underground fluid and gas.

But in Rodriguez’s first year, TWRI senior research scientist Dr. Rosario Sanchez reached out to her about helping with TAAP. Studying transboundary aquifers is complicated: Mexico and the United States use different languages and measurement units in their research, and the countries’ shared aquifers vary in their geology, environmental conditions, regulations and usage. Rodriguez’s extensive knowledge of geology and GIS, as well as her ability to speak Spanish, made her ideal for navigating those complications.

“We needed to find the same methodology for both sides. Otherwise it’s like comparing grapes with apples,” Rodriguez said. “We matched up aquifers for all the border between Texas and Mexico.”

Sometimes, the trouble lay not just in matching up maps but in whether to call aquifers transboundary at all.

For an aquifer to be defined as transboundary, the water must clearly flow across the border from one country to the other. But instead of flowing towards one side of the border, the Allende-Piedras Negras Aquifer’s water converges in the middle of the aquifer just below the Rio Grande River — the border between Texas and Mexico.

“It was kind of confusing whether to define the aquifer as transboundary, because everything flows to the center,” Rodriguez said.

To get a more precise measure of the water’s flow, Rodriguez created a numerical model. The model showed her that water did indeed flow from one country into the other, but that the direction and amount of flow depended on how much and where the aquifer was pumped.

Pumping from an aquifer changes water flow, pulling water towards the well being pumped. Because of the location of the Allende-Piedras Negras Aquifer, pumping from the aquifer makes the water flow better fit the definition of a transboundary aquifer.

“The numerical model showed us that if there is no pumping at all, the flows just converge under the Rio Grande,” Rodriguez said. “But as soon as you start pumping, you start moving the convergence zone. If you’re very close to the border, you’re going to change that flow from one country to the other.

“The problem is not the physics of the water on the border,” she said. “The problem is more the politics — the meaning is going to change depending on how much you pump.”

Rodriguez defended her master’s thesis on the Allende-Piedras Negras Aquifer in September 2018. Now, she’s continuing her work for TWRI on TAAP and her aquifer as part of a Ph.D. She wants to create a more detailed numerical model that analyzes data day by day instead of month by month and takes into account more factors, like specific pumping schedules.

Rodriguez is still drawn to puzzles. Her and the TAAP team’s work is helping keep a complicated international puzzle together, addressing issues of science, resource management and international relations.

“I've heard a lot of people say, ‘No, I don't work with groundwater, because I can't see it underground, so it's hard,’” she said.

But, she said, studying aquifers “is like taking out pieces that are spread everywhere and putting them back together.”

Rodriguez’s — and our — understanding of her aquifer, the Allende-Piedras Negras Aquifer, is still evolving. And for her, that’s the joy of it.