The physics of a water main break 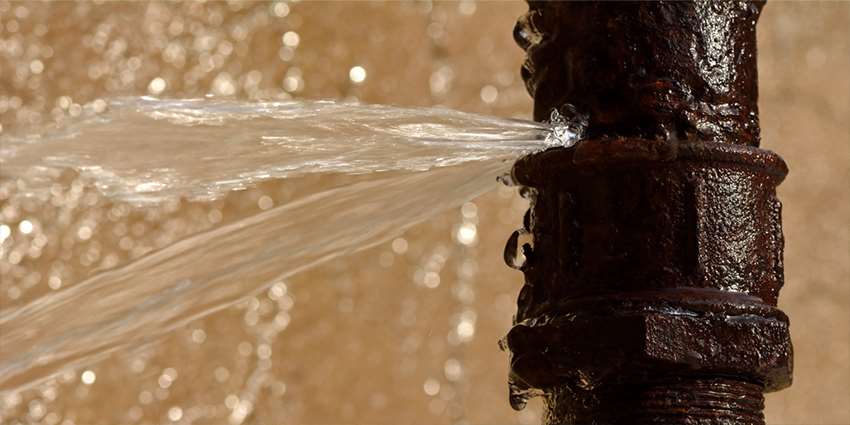 A busted water main can cause thousands to millions of gallons of water to come gushing out of the ground. It can also put a city’s water supply at risk.

A water main refers to the central pipe within a city’s interconnected water system that gets water from the city to supply to a kitchen faucet.

These breaks can be caused by things such as corrosion over time, construction or extreme weather conditions.

“It’s one of those things that just happens when the ground starts moving. Our pipes don’t like a lot of movement,” said Jon Clack, assistant director of public services for wastewater and water utility in San Marcos, Texas.

Texas residents live in a state with erratic weather patterns and are no strangers to these occurrences.

On average, Texas municipalities issue 150 boil water notices per month, which are commonly due to breaks to water mains.

Under (not enough) pressure

Normally, city water pressure is supported by pumps that additional pressure throughout cities or by water towers that use gravity to create and maintain water pressure.

When a break happens, not only does the water escapes, but also the energy and pressure that maintains this water flow — causing the entire system to lose pressure.

The Texas Commission for Environmental Quality’s (TCEQ) minimum standard for city water pressure is 35 PSI with a rate of 1.5 gallons per minute.

While some water may continue to flow through the system below this level, most of it will be lost and other undesired substances may leach into the pipe.

Allison Strube, director of water utility for San Angelo, Texas, explained if the pressure in the system drops below 20 PSI, the system becomes vulnerable for bacteria from groundwater or dirt to seep into the pipe and affect the water supply. This is why the city will often issue a boil water notice in the event of a water main break.

As long as the pressure stays above 20 PSI, the water will be safe to drink even if a small hairline break occurs. “If you maintain adequate steady pressure in the pipe, water or bacteria is not going to seep in: it’s actually going to leach out of the pipe more than it's going to come in,” Strube said.

The extent to which a break affects the city depends on the size, location and accessibility of the break.

Some breaks will not have a widespread effect a city’s water supply if the break occurs at a different pressure plane than the most populated area of the city. “Due to the elevation of the town in different areas, to maintain pressure in a certain geographical area, one area may be separated from the supply system that may serve a neighborhood across the highway,” said Strube.

Anything that causes the ground to move can disrupt the infrastructure of an underground water system.

According to the 2017 State Water Plan by the Texas Water Development Board, Texas is expected to increase 73% percent between 2020 and 2070, from 29.5 million to 51 million people. This growth is likely to bring new infrastructure and construction projects to the state.

Climate change is also causing more frequent and extreme weather events, plaguing the state with high temperatures and prolonged droughts. “When things get really dry, we start getting more breaks because the ground dries out and shifts,” said Clack of San Marcos.

As both population growth and climate change are stirring up the Earth — breaks are bound to happen. When they do, there are a flurry of people that are involved in getting the city’s water back on track.

Clack explained that when a water main breaks around 20 to 30 people are involved in the entire process: from fixing the break, to keeping the public informed, and sampling and testing the water to make sure it’s safe to use and consume.

“Our people are passionate about their work and they do a good job. They know they are frontline workers and responsible for the public’s health and they take that very seriously,” he said.