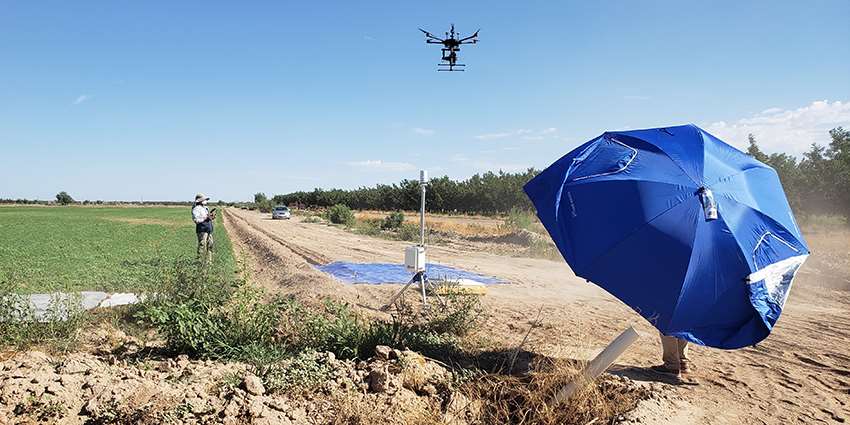 An interdisciplinary team of researchers from Texas A&M University and University of Texas-El Paso (UTEP) has won a grant to fund research that could help the understanding of climate change and create improved tools for sustainability in agriculture.

The roughly $1.2 million National Science Foundation research grant is part of the “Signals in the Soil” program. The collaborative team includes principal investigator Saurav Kumar, Ph.D., assistant professor in Texas A&M’s Department of Biological and Agricultural Engineering, part of the College of Agriculture and Life Sciences. Kumar is the Texas A&M principal investigator (PI) on the project.

“The project brings together a diverse group of scientists from different institutes to study a problem of both local and global significance,” said Kumar, also a water specialist at the Texas A&M AgriLife Research Center at El Paso.

“The results will have immediate impacts on pecan water usage and generally water sustainability in the El Paso region. On a longer term and global scale, the project will help us understand the global carbon dioxide balance,” he said.

The research will examine and try to quantify the release of abiotic carbon dioxide (CO2) that seems to result from calcite precipitation associated with irrigation in arid agricultural soils. The team will specifically be looking at this phenomenon in irrigated pecan orchards in the El Paso region.

“We think this is a new angle that people haven't looked at with mineral precipitation and carbon dioxide release,” said Lixin Jin, Ph.D., associate professor and assistant chair of the Geological Sciences department at UTEP. Jin is both the UTEP PI and lead PI on the project. “If this proves to be important, this problem might be happening across the world.”

Jin explained that calcite can form naturally when calcium and carbon interact. Calcite can clog pores in the soil that allow water to penetrate and make it impossible for roots to grow.

“Unfortunately for humans, when we irrigate, we bring the perfect recipe to precipitate calcite in agriculture,” Jin said. This can harm plants, lower yields and generally make farming more difficult and less productive. If calcite continues to build up in soils, the soils themselves can be degraded to the point of being useless to agriculture. The concrete-like caliche soil of Texas’ drylands is an extreme example of what calcite precipitation can do to soil in the long term.

Not only does the buildup of calcite in the soil pose a threat to Texas agriculture, the process also releases carbon dioxide. How much is released and can be directly attributable to calcite precipitation alone — rather than by other natural biological processes — is not known, however, said Jin. Past research suggests it could be large and this research hopes to fill that knowledge gap.

“The carbon efflux from calcite precipitation may be bigger than people have thought and another way that humans are changing the carbon dynamics on a global scale,” Jin said.

“We have really small-scale evidence of that happening, but now with this highly interdisciplinary team — which will really expand our toolbox — we’ve really covered science and engineering and can expand on that previous research,” said Jin.

In addition to Kumar, a civil engineer by training, and Jin, a geologist, co-principle investigator Girisha Ganjegunte, Ph.D., is a soil scientist and professor in Texas A&M’s Department of Soil and Crop Sciences, part of the College of Agriculture and Life Sciences. Co-principle investigator Marguerite Mauritz, Ph.D. — research assistant professor in UTEP’s Environmental Science and Engineering program, part of the Biological Sciences department — is a biologist and ecologist by training.

In addition to all four bringing their own specialties and research technologies to bear on the project, they will also bring different technological methods and tools to the table. For example, the researchers plan to utilize the eddy covariance towers that Mauritz has worked with in the past and remote sensing using drones that Kumar has focused on lately, to measure CO2 at different points in the atmosphere above the test site.

“The ideas have been around, but I don't think anybody has implemented them in the way we have or the way we are doing it,” Kumar said.

He also pointed out that, while the project is slated to run through 2024 and look at issues that could have global implications, they are likely to produce some very tangible information for Texas growers as a result too.

“In the very short term, with all of the instrumentation that we are putting into the pecan orchards, we are going to get a better understanding of how much water the pecans need and how much is really used when they are being flood irrigated That information could be something producers could instantly use.”