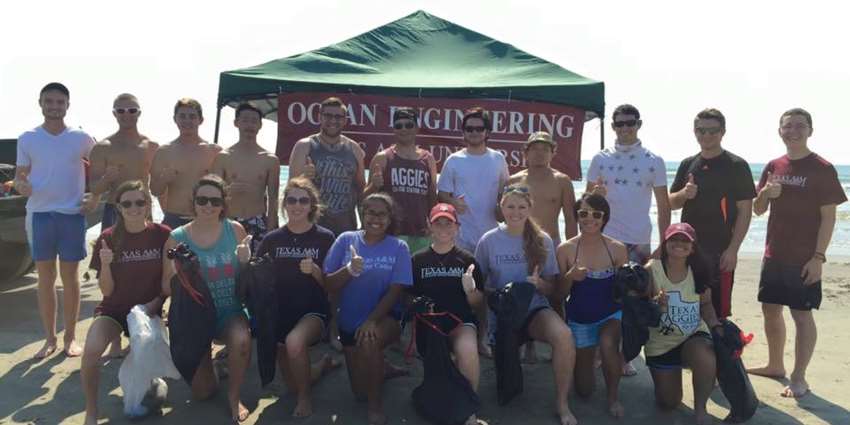 While most students consider a beach day to be a relaxing vacation, a handful of Texas A&M University students recently turned a coastal visit to an environmental conservation opportunity.

Twenty students from Texas A&M’s student chapter of the Marine Technology Society (MTS) and Society of Naval Architects and Marine Engineers (SNAME), joined hundreds of other volunteers on Sept. 26 to participate in a Galveston beach cleanup.

The effort was part of the Texas General Land Office’s Adopt-A-Beach Program, which organizes two statewide beach cleanups throughout the year as well as offers an adoption system for groups wishing to assume responsibility over a section of beach. Adopting a beach is a three-cleanups-a-year, two-year commitment that the group undertook to help promote organization involvement with environmental conservation.

The land office’s program provided safety equipment such as gloves and trash bags to volunteers who spent most of the day removing trash from the Galveston coast. Much of the trash removed during the cleanup was tiny pieces of plastic, called microplastics, said Amanda Massingill, vice president of MTS. Microplastics generally begin as larger pieces of plastic but eventually deteriorate to smaller fragments due to continuous abrasion.

“Getting microplastics out of the ocean before they break down even more is really important, because at this point they’re still big enough to see and pick up,” she said. “When they get even smaller, you can’t pick them up anymore.”

The small size of the plastics allows them to be easily swept into the water supply and ingested by fish and other aquatic life, she said. Ingesting harmful substances could lead to death or affect their meat for human consumption.

Microplastics from the ocean often wash up to the shore and collect in clumps on driftwood, said Austin Grieger, student chapter president of MTS/SNAME. Larger pieces of litter can then get caught in the pile.

Fishing lines and hooks also comprised a large portion of the debris picked up by volunteers, Massingill said. “Galveston’s a huge fishing destination, and fishing lines pose a huge threat to the environment. Wildlife gets tangled up in them all the time.”

The immediate removal of debris is beneficial to wildlife as it prevents accidental ingestion and entanglement, but regular beach cleanups are critical for continued environmental protection, she said. Early removal of large pieces of plastic prevents them from being broken down to smaller, more unobtainable pieces that disperse into the water supply.

“Just like when you clean your room, as long as you stay on top of it, it’s easy, it’s manageable,” Grieger said. “If you weren’t cleaning that beach every year, it would be easy to come back to it two years later and see a pile of trash because no one’s giving it any attention.”

The program provides data cards to all volunteers to help track the source of the trash. Analyzing the different types of litter can provide information to the Texas General Land Office regarding where it originated from, Massingill said. While some debris may come from messy beachgoers, some has been floating and decomposing in the ocean for a long time.

According to the Texas Adopt-a-Beach website, because of the tidal patterns in the Gulf of Mexico, trash dumped anywhere in the gulf, even as far away as South America, is most likely going to wash up on a Texas beach. The land office’s analysis of the trash collected by volunteers has been monumental in the passage of international laws and treaties designed to protect coastal waters from offshore dumping, according to the website.

The beach cleanup benefited the students as well, who were able to enjoy the advantages of a clean coast after their day of work. “We got to have fun on the newly cleaned beach. We played sports. We fished,” Massingill said. “And there’s no glass we could have stepped on, because we cleaned it all up.”

For more information on the student chapter of MTS-SNAME, visit its website.