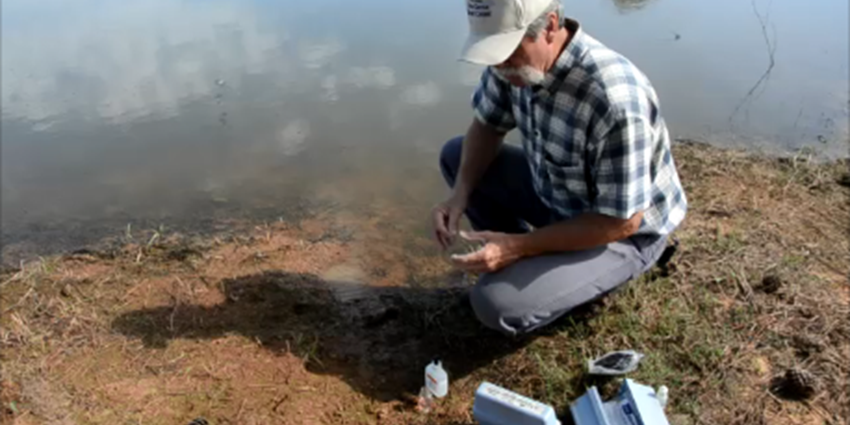 Summer is beginning to heat up in Texas, and a Texas A&M AgriLife Extension Service expert advises landowners to start monitoring stocked ponds for oxygen depletion.

From June to September, when the outside air is increasingly hot and pond water temperatures climb, are the time of year when oxygen depletions occur most for a variety of reasons, he said. Improper aquatic weed control, too many pounds of fish and the weather all contribute.

Higginbotham said typical ponds can sustain 1,000 pounds of fish per surface acre through summer months. When the environment is optimized and the pond owner stocks heavily, especially with channel and blue catfish, and feeds heavily with floating fish rations, that density level can be easily met and exceeded.

Oxygen production via photosynthesis can slow or stop after several hot, still, cloudy days, while fish can continue to use oxygen until it falls below 3 parts per million gallons, which stresses fish, Higginbotham said. Fish will then begin swimming to the surface to try to obtain enough oxygen to survive at the air-water interface.

Higginbotham recommends checking the pond at daybreak when oxygen levels are at their lowest daily levels. The pond owner should act quickly if fish are surfacing for air.

“It’s almost as if they are gasping for air at the air-water interface,” Higginbotham said. “That’s a clear sign of oxygen depletion, and the pond owner should act quickly to avoid a complete die-off of their fish.”

Backing a boat engine into the pond and circulating the water is one way to create more oxygen, Higginbotham said. Pond owners can also place a water pump in a shallow portion of the pond and spray water along the surface to circulate water along the air-water interface.

Once oxygen levels are restored, Higginbotham said pond owners should investigate the pond conditions that contributed to the depletion. He recommends thinning fish populations to reduce the pounds of fish the pond supports going into the mid-summer months.

Controlling aquatic vegetation can also contribute to oxygen depletion, Higginbotham said. Oxygen is removed from water as plant tissue decomposes, which can create a scenario where a die-off might occur.

Weed control efforts should be done gradually, about 15-20 percent of the vegetation at a time and with a week break between treatments, he said.

An aeration system is also a good investment for landowners to avoid problems or prevent future problems, Higginbotham said.

“Watch very carefully as we enter these still, cloudy days, the dog days of summer,” Higginbotham said. “Be mindful of oxygen depletion and the possibility of losing fish populations.”