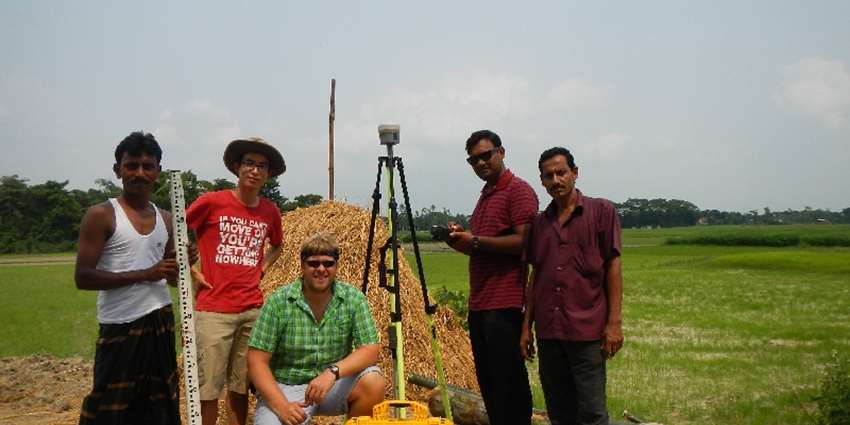 Flowing through South Asia across India and into Bangladesh, the Ganges River is largely undrinkable. It flows into the largest delta in the world, the Ganges-Brahmaputra Delta, where the poor water quality is indicative of the regions’ low-quality surface water and groundwater, with the latter containing highly toxic concentrations of naturally occurring arsenic.

“There’s an older term for somebody who does what I do,” Knappett said. “It’s called a contaminant hydrogeologist.”

A native of Ontario, Canada, Knappett received a bachelor’s degree in honors science with a minor in earth science and a master’s in applied sciences and water resources at the University of Waterloo.

Knappett then began work at a national lab in Germany, researching water-borne pathogens and how diseases spread through water.

“I wanted to learn more about how viruses and bacteria go through groundwater,” he said. “Working closely with microbiologists and doing that interdisciplinary work — I thought that was really fascinating.”

After earning his doctorate in hydrogeology at the University of Tennessee in 2010, Knappett began to spend more time in Bangladesh, where limited surface water treatment options force citizens to rely on untreated groundwater as their main water source.

“One is fecal contamination from poor sanitation getting into their wells,” he said.

The other is naturally occurring arsenic, which is found closer to the surface and in shallow aquifers. Consuming arsenic can lead to many health problems, including illnesses, skin lesions and cancers, Knappett said.

Because most households in Bangladesh rely on shallow hand-pump wells, which are screened above the deep points in aquifers, which tend to have little arsenic, avoiding arsenic-contaminated water is very difficult, he said.

Solutions are being developed, however, to address the country’s water quality problems.

“There’s been hundreds of organizations working with them, from very practical things like providing treatment or advice on their mitigation program or helping them understand the root causes from where the arsenic is coming from,” he said, adding that providing communities with deep wells is another way organizations help residents avoid arsenic.

One of Knappett’s recently published studies examined how groundwater pumping in Dhaka, the capital of Bangladesh, contributed to the spread of arsenic water.

The pumping changes the hydraulic gradients, or pressure gradients, inside the aquifer, which causes a relative vacuum to form deep in the aquifer. The low-pressure zone may draw high arsenic water to spread out laterally and vertically, covering a larger surface area and contaminating a larger part of the aquifer that was previously safe, he said.

“There’s a lot of inequity forming where the city is monopolizing groundwater, and it’s leaving the rural people with fewer options on where to get their low-arsenic water from,” he said.

Hydraulic gradients caused by urban and agricultural pumping are not unique to Dhaka, and Knappett uses his research in Bangladesh to better understand groundwater contamination issues in other areas of the world.

Texas cities such as El Paso, Houston and Dallas have concentrated urban pumping that draws water down into a cone of depression, Knappett said. This depressed area brings the entire water table down.

Agricultural irrigation in West Texas pumped from the Ogallala Aquifer also lowers the water table, though it is more diffuse than urban pumping, he said.

While researching water issues in developing countries, Knappett witnessed the effects of a global phenomenon known as leapfrogging. This concept refers to the idea that impoverished areas can make rapid advances in technology through the adoption of contemporary systems.

For instance, he noted that in some parts of the world, people live in mud huts but have access to cellphones and television.

Open-access journals are one example of a leapfrog development that can help people in developing countries find solutions to groundwater management, he said. Privately owned peer-reviewed journals charge users a fee for each publication. But open-access journals publish their content online for free, so anyone with internet access can read the journals.

For countries with poor infrastructure, access to expert research is critical for finding solutions to their water quality problems, he said.

“Access to information is crucial to developing curiosity and to expanding our knowledge and imagination of what is possible.”