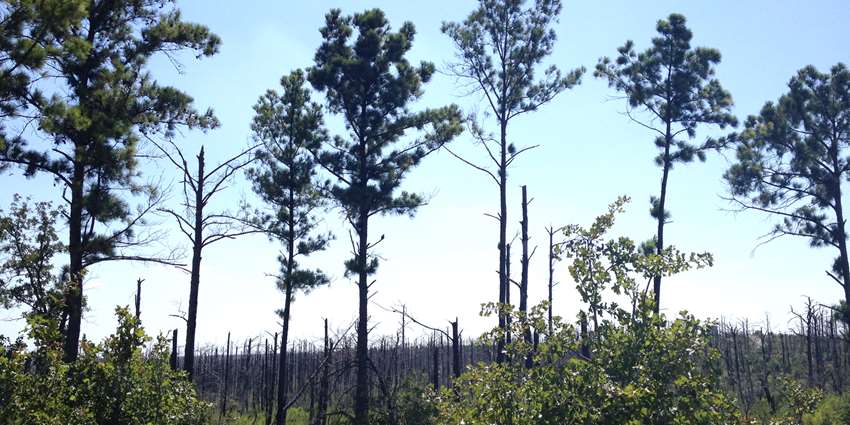 Without human help, the “Lost Pines” may lose some of what it is known for, according to a Texas A&M AgriLife study.

Almost six years ago, wildfire ripped through the “Lost Pines” ecoregion, located in Bastrop, Fayette and Caldwell counties.  This patch of pine-dominated forest constitutes the western-most range of loblolly pine in the U.S. and is isolated from the rest of the East Texas Piney Woods by over 100 miles.

Due to the concern about this unique region and specifically Bastrop State Park, Caitlyn Cooper, an agronomy doctoral student at Texas A&M University, and her advisers conducted a two-year study to look at burn severity and soil type and the effect of the two on oak and pine growth and water use.

Cooper said she found the pine trees were reestablishing themselves where the fire severity was light to moderate. However, where the fire was severe, there had been a shift to more post oak and blackjack oak growth.

“Our concern was that resprouting oaks may alter resources and make conditions unfavorable for pine reestablishment,” she said. “We designed an experiment to test the effects of fire severity and soil type on the growth and leaf-level functions of resprouting post oaks, blackjack oaks and loblolly pines, hoping to better understand the physiology of the three species and how their long-term recovery may be affected.”

In July 2015 and 2016, Cooper and two other students measured resprout heights and diameters and collected leaf samples for nitrogen, carbon and phenolic compounds that would provide an indication of plant stress response.

“We took measurements in three soil types ranging from deep sands to shallower rocky soils and replicated those measurements in each soil type and burn severity combination three times for a total of 18 plots,” she said.

In 2016, the project expanded to include additional measurements to analyze foliar photosynthesis, water potential and hydraulic characteristics, which would increase understanding about water access and use by the three species, Cooper said.

Although the pines tended to be shorter than the oaks in 2015, they had similar heights to the resprouts by 2016, she said.

“Our leaf-level measurements suggested that the oak resprouts were better able to tolerate drought stress, while the pine seedlings were more conservative with water use and exhibited drought-avoidance characteristics,” Cooper said. “Post oak was more tolerant of drought stress than blackjack oak.”