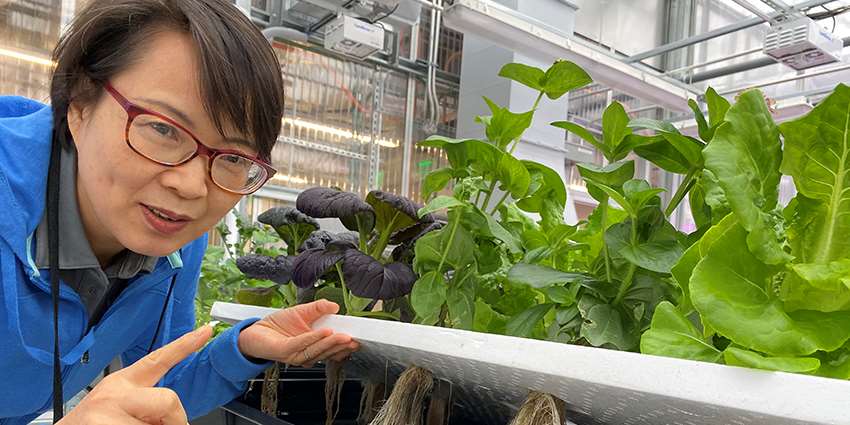 Dr. Genhua Niu is always on the lookout for the next agricultural innovation. As a professor of urban agriculture at the Texas A&M AgriLife Center at Dallas, she studies how growing environments can be adjusted to enhance plant growth and quality in urban settings, such as by manipulating the light quality, light intensity or nutrient solution.

Niu grew up in southern China in a farming-heavy area, often seeing farmers working laboriously in the fields.

While working at a Chinese horticultural research institute after completing her master’s degree, she became involved with a Chinese-Japanese collaborative research project. The project allowed for the development of hydroponic facilities, giving Niu her first opportunity to dive into the growing field of soilless agriculture.

Niu went on to complete her doctorate in horticultural engineering at Japan’s Chiba University, followed by research positions around the United States. In 2004, she brought her expertise to the Texas A&M AgriLife Research Center at El Paso, and in 2019, she brought it to the Dallas Center.

Throughout all of her work, she has been interested in making agriculture more efficient and effective.

“I was always looking for new technologies within agriculture, how we could increase water use efficiency and nutrient use efficiency,” she said.

Indoor vertical farming, which Niu studies, is one of the best ways to do efficient urban agriculture and the highest level of controlled-environment agriculture, she said.

Niu said indoor vertical farming saves resources: water, nutrients and land. Instead of sunlight, electric lights such as LEDs are used, and plants are grown hydroponically or aeroponically. Indoor vertical farming, she said, is particularly well-suited for Texas, due to increased urbanization and shortage of water.

By growing plants indoors, troubles of seasonality can be eliminated, Niu said. Crops such as spinach and other cool-season leafy greens, which are difficult to grow in Texas’ summer heat, can be sown and harvested year-round.

“Growing indoors allows you to be independent of the outside environment and have high resource use efficiency,” she said. “You can have any kind of day length, light intensity or wavelength. You can control the growth so much better than outside.”

“When we have droughts, we don't have enough water, and we can’t always just grow outdoors. So we have to recycle water. And of course, hydroponic systems are ideal for recycling water,” she said.

In addition to recycling water in hydroponic systems, Niu ensures that nutrients are recycled for as long as possible. But, she said, nutrient recycling can sometimes result in nutrient imbalance, for example if a particular plant always takes up more of one nutrient than another. To manage this, she develops nutrient recipes for replenishment based on what nutrients different plants use. Then, when nutrient solutions are recycled, they can be replenished with only the nutrients the solutions are short on, and all nutrients remaining in the solution can be used again.

“By developing tailored nutrient recipes, we can minimize the dumping of still-usable nutrients,” she said.

Pecans are one of the biggest cash crops in the Rio Grande Basin, which is seriously threatened by drought, climate change and population growth. But pecans use a lot of water, and irrigation water often has a high salt content in semi-arid regions like West Texas. As part of a Coordinated Agricultural Project in the Rio Grande Basin, Niu is investigating salt-tolerant pecan rootstocks and emerging crops such as pomegranate trees, which are particularly well-suited to the area.

“Pomegranates are one of the most drought- and salt-tolerant crops I have ever worked on,” she said. And they’re fast — pecans take around 14 years to reach full production, while pomegranates take only four, Niu said.

Adjusting to the idea of new crops isn’t always easy, she said. At first, farmers were unsure whether to plant pomegranates. But Niu and her colleagues had workshops and worked with local nurseries and found that pomegranates and other salt-tolerant plants started to catch on.

“More people have become interested in salt- and drought-tolerant plants. I get that feeling like, ‘Oh, people are listening to what I say!’ I feel happy when I can introduce people to these improvements,” she said.

“The common thing people say about indoor farming is, ‘Oh, sunlight is free! Soil is free! Why don’t you just use them?’” she said.

Those arguments don’t consider “the limitations of sunlight,” Niu said, including the fact that plants only use the visible light wavelengths, which is less than half of the sunlight.

With increased population growth and urbanization, it will be necessary to produce and provide more food in urban environments both in Texas and around the world, Niu said. Her work can help with that.

By always looking ahead to the next agricultural innovation, Niu can conserve water, land and nutrients. And she can do it all while continuing to do what she’s always wanted to do: help make farming more efficient and effective for farmers.