All the water that has ever been on Earth — except what’s gone to the International Space Station — is still here in some form. But only 3% of that is freshwater, and only 0.5% of the planet’s freshwater is easily accessible. If all the world’s water fit into a gallon jug, then the easily accessible freshwater would be roughly one tenth of a teaspoon.

The growing global population is using more freshwater, and climate change is causing more extreme droughts and flooding, said Bridget Scanlon, Ph.D., senior research scientist in the Bureau of Economic Geology at the University of Texas (UT) at Austin.

“We are running out of water in some places, and we have more water in other places,” she said.

At a conference of the Stockholm International Water Institute, Scanlon heard the water crisis described as being one of “too much, too little or too polluted.”

“As the population grows, and as climate change becomes really concerning, how can we accommodate these growing droughts?” he asked.

To meet that challenge, researchers are looking for freshwater in unexpected places.

Scanlon explained the first place to find freshwater is by looking at the “too much” part of the water crisis: capturing water from storms and floods.

Researchers are looking to unexpected sources to supplement freshwater supplies.

“Texas has always been subjected to either floods or droughts,” she said. “If you have a problem with a supply-demand disconnect — either a spatial or temporal disconnect — you could try to resolve that by storing water or transporting it. The flood water in much of central and eastern Texas is a great resource.”

There’s been interest in taking advantage of stormwater in Texas. In 2019, Scanlon coauthored a study with Qian Yang, Ph.D., Bureau of Economic Geology research associate, quantifying how much stormwater could be captured from high water events in Texas rivers from 2015 through 2017.

Scanlon and Yang found that the amount of water flowing in 10 major Texas rivers during high-flow events was nearly as much as the capacity of Lake Mead, the United States’ largest reservoir.

“That water represented more than the state was using in a particular year, you know, the average water use, if we could capture the water from those three years,” Scanlon said.

We are running out of water in some places, and we have more water in other places. ... If you have a problem with a supply-demand disconnect — either a spatial or temporal disconnect — you could try to resolve that by storing water or transporting it.

The second unexpected place to find freshwater is saltwater. Some countries in more arid parts of the world have already turned to desalination to meet demand for freshwater.

Desalination accounts for roughly 1% of the world’s freshwater, but its use is growing. In Texas, there are more than 50 desalination plants that treat brackish groundwater and surface water. This can produce over 150 million gallons of water per day for municipal use. There are no operational seawater desalination plants in Texas, but several projects are in progress on the Gulf Coast.

A third source of freshwater is sewage, or municipal wastewater.

Over 75% of usable water can be recovered from wastewater, in contrast to 20-50% water recovery from seawater, said Qilin Li, Ph.D., professor at Rice University and co-director of the Nanosystems Engineering Research Center for Nanotechnology Enabled Water Treatment. And unlike stormwater, wastewater is essentially always available, so it can be harvested at a steady rate.

[By reusing wastewater], you can reduce the uncertainty in your water, and you can reduce discharge of waste streams into your natural aquatic system.

Typically, wastewater is treated up to a level that the effluent — treated wastewater — is safe enough to be discharged into waterways.

“What you do in wastewater reuse is you take the effluent from the existing municipal wastewater treatment plant, and you further treat it to a much higher quality,” Li said.

That fully treated water can then be distributed through the same water system as conventional water sources, such as surface water and groundwater. When the water goes straight from the wastewater treatment system to the drinking water treatment system, that’s called direct potable reuse. Li said that direct potable reuse is the simplest and most affordable method for reusing wastewater.

“In the long term, you can reduce the uncertainty in your water supply, and you can reduce discharge of waste streams into your natural aquatic system. And overall, you can potentially save some energy, which will help reduce the carbon footprint of the water system for the city as well,” Li said.

Another source of water is all around us, said Xianming Dai, Ph.D., assistant professor of mechanical engineering at UT Dallas.

“Air is everywhere,” he said. “Researchers show that there is over six times the amount of water in vapor around our planet than in all the rivers. Six times. That’s enough for many purposes, if we can have good technology to harvest water from air.”

“They found that in the desert, a beetle collects water from fog for survival. Nature is smart,” he said. “We wanted to get inspiration from nature.”

“You can think about the gel kind of like a slowly absorbing sponge,” he said. “The gel-coated soil harvests the moisture from the air and stores the water, particularly in the humid and cold night. Then when the sun rises and it heats up, they can release water slowly. So it’s very efficient.”

Because the gel is coated onto soil, the water collected by the gels is released into the soil. Each kilogram of self-watering soil can absorb roughly 3-4 kilograms of water, “so it’s actually more than enough for many of the common kinds of crops to grow,” Yu said.

Being prepared for that uncertain future will depend on “whether we’ve done our homework.”

Getting ahead of the curve

Cost, public opinion and the limitations of materials have always complicated the use of alternative water sources, but barriers are coming down slowly but surely.

For example, in 2020, researchers found that if the membranes used in desalination have more uniform density — down to the nanometer scale — they are far more energy efficient and therefore more cost-effective. Dai and his research team also recently discovered a phenomenon called the coarsening effect, which helps tiny water droplets coalesce, solving a major problem for harvesting water from air.

Both discoveries are useful across multiple freshwater sources. Dai’s discovery can be used to improve thermal desalination as well as harvesting water from air, and the desalination membrane discoveries can also benefit stormwater and wastewater treatment.

Still, each source of freshwater has more work ahead to make it broadly usable.

Scanlon said that Texas-specific pilot studies are needed to demonstrate that stormwater can be used effectively as a water source in Texas, and both wastewater and stormwater reuse will require building more infrastructure. Li said that implementing wastewater reuse will require helping the public get over the “yuck factor,” as well as overcoming communication barriers.

“There is still a huge gap between what we think can be done and what municipalities are willing to do or think they’re ready to do,” she said. Researchers need to connect with decision makers and the general public so that everyone is on the same page about the problems and the solutions, she said.

“There are many places in this world that don’t have enough freshwater resources that are nearby and accessible and at a low cost,” she said. In those places, water reuse is already needed. Elsewhere, climate change and population projections show that water reuse will be needed in the future.

Being prepared for that uncertain future will depend on “whether we’ve done our homework,” Scanlon said. But, Li said, there’s an opportunity to get ahead of the curve.

“This is why we are thinking about how we can prepare,” Li said. “Cities that are already using alternative freshwater sources, they’re doing it out of necessity. But many other cities, they have a chance to do this right, to design a system we can optimize in multiple different ways.”

Back to issue
Colonias: The Canary in the Water Security Coal Mine
The Future of Water Infrastructure in the U.S. and Texas
Working for Tomorrow’s Water
Deciphering Big Data in Water 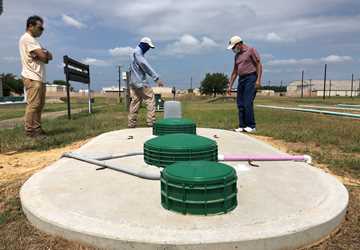 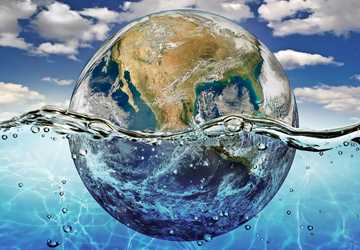