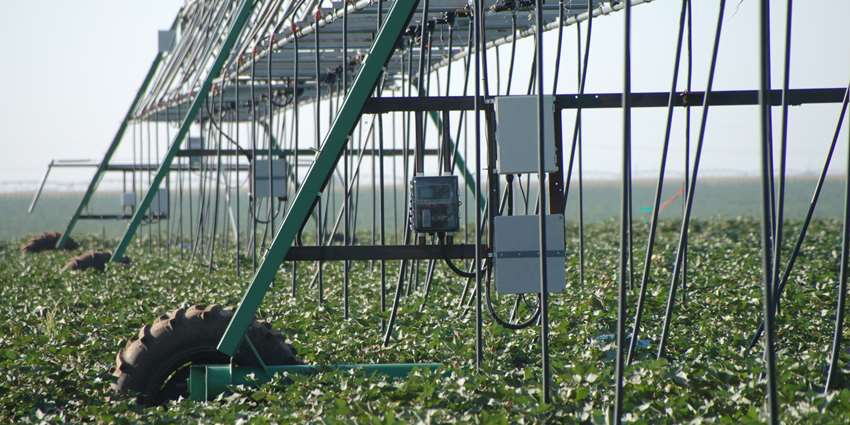 The Ogallala Aquifer Program (OAP) received the U.S. Department of Agriculture (USDA) Secretary’s Honor Award in December 2013. The honor was given to OAP “for sustaining rural prosperity across the drought-prone Southern High Plains by finding solutions to problems from declining water availability for the Ogallala Aquifer,” the award stated.

The Texas Water Resources Institute serves on the leadership team for the program.

The 10-year-old program has contributed to the conservation of the aquifer through major advances in on-farm water conservation activities while also promoting agriculture, according to OAP.

Major accomplishments of the program include advancements in the design and management of subsurface drip irrigation. Regional acres using this technology have doubled since 2003. Additionally, development of soil moisture sensors has provided real-time, accurate data on total soil water availability.

Extension programs offered through the program have educated farmers on water conservation practices, and media stories have also informed the public about the aquifer’s importance to state and national food and fiber production.

OAP’s research has also impacted Texas water policy by contributing to the development of Region A (Texas Panhandle) Water Plans.

Regional water planners examined the impact of implementing water conservation practices that are based on OAP research. These practices include continued adoption of efficient irrigation systems like center pivot and subsurface drip irrigation; irrigation scheduling based on crop needs using sensors that detect crop water stress and/or the integration of weather data; and use of crop varieties that have lower water requirements.

Adoption of these practices is projected to reduce irrigation demand so that supply will exceed demand from 2050 to 2060. Such conservation efforts, based on technologies and knowledge from the OAP, are expected to maintain and expand the $4 billion agricultural economy of the Texas Panhandle, as documented in the current Region A Water Plan.

The Ogallala Aquifer Program is funded by a USDA ARS research initiative.