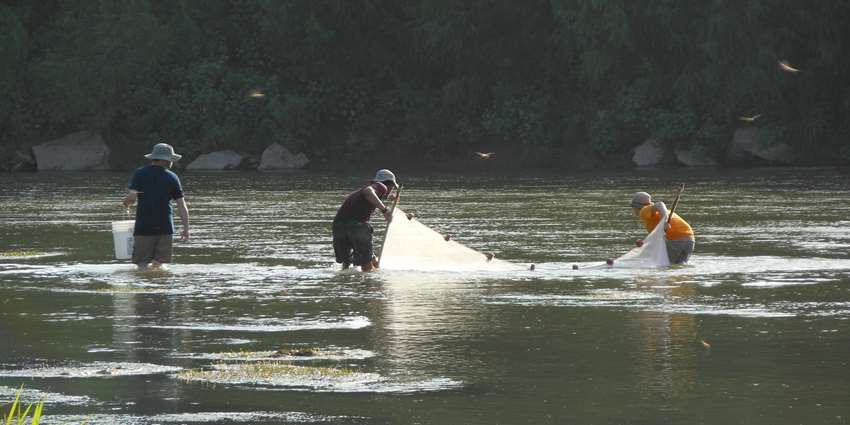 Tony Rodger, who graduated earlier this month with a master’s degree from the Department of Wildlife and Fisheries Sciences at Texas A&M University, studied minnow species in the lower Brazos River Basin to determine how environmental flows affected early life stage survival. His study concluded that high flow events help maintain the biodiversity of fish within the lower Brazos River.

Rodger is a 2014–2015 Mills Scholarship recipient. These scholarships, funded by the W.G. Mills Scholarship Memorial Endowment and administered by the Texas Water Resources Institute, support graduate students at Texas A&M, Texas A&M at Galveston and Texas A&M at Qatar who are pursuing water-related research with the potential to help Texas solve future water problems.

He found that high flow events in the Brazos River were critical for successful survival of shoal chub, a species representative of fluvial specialists, a group of minnows particularly responsive to flow variation. These minnows have semi-buoyant eggs and larvae that drift with the current. Shoal chub larvae had higher survival when hatched during flow pulses compared to base or subsistence flows, Rodger said.

Environmental flows have been a complicated aspect of Texas water management for decades. The state determines the amount and timing of water that must move through rivers to maintain a sound ecological environment, and those requirements are considered environmental flows.

According to Rodger, environmental flow recommendations in the past maintained only certain baseline flows that did not include aspects of discharge variability that typically characterize Texas streams and rivers. In addition to affecting spawning and survival of fish eggs and larvae, environmental flows also influence aspects of water quality, such as dissolved oxygen, pH and nutrients, which are critical for survival of virtually all aquatic organisms.

“Now scientists understand the importance of the natural flow regime — a historical pattern of streamflow prior to any human modification, such as water withdrawals, dam construction, land use changes, etc. — in maintaining the biodiversity and native species within these systems,” he said. “This research helped demonstrate the validity of including high flow pulse events in environmental flow regimes.”

Another reason high flow pulses are important to the Brazos is because they establish connections between the river channel and oxbow lakes in its floodplain, Rodger said. Oxbow lakes form when a meander in the main river channel is cut off during the normal processes of sediment erosion and deposition, he said.

Rodger’s study found significant relationships between large magnitude flow events and abundances in the river of certain fish species that tend to be common in oxbows but often rare in the main channel.

“These temporary lateral connections not only replenish oxbows with water and aquatic organisms, but certain fish species subsequently build up large numbers in oxbows,” he said. “During subsequent high flow pulses, many of these organisms move back into the main river channel, which perpetuates what ecologists have termed metapopulation dynamics. These dynamics are critically important, because, without migration between oxbows and the active channel, certain species probably would experience major population declines in the river.”

Dr. Kirk Winemiller, regent’s professor in the Department of Wildlife and Fisheries Sciences, served as Rodger’s advisor. See the Mills Scholarship page to learn more about Rodger’s research and read his full thesis.