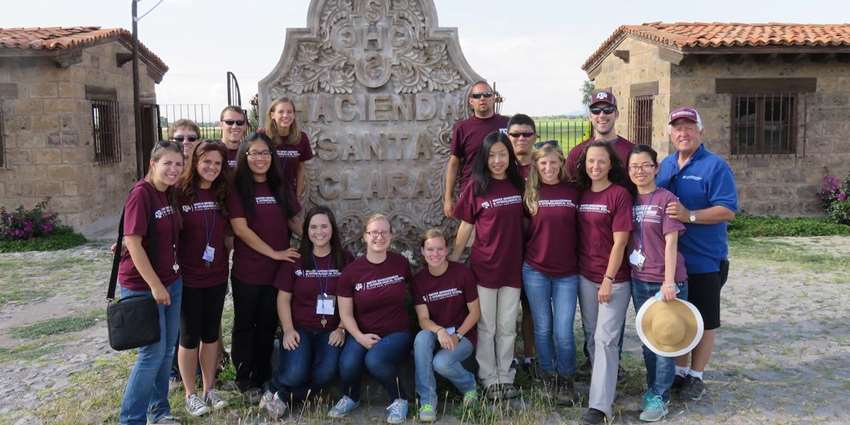 The Water Management and Hydrological Sciences (WMHS) 602 study abroad course: “Contemporary Issues in Water Resources: Mexico and the U.S. Water, Energy and Food Nexus” was a required class for many of the students enrolled in the WMHS program.

The course’s objective was to provide a unique learning experience for students to directly explore water resource systems in the state of Guanajuato, including the economic, political and social issues of such topics in comparison to water management in Texas, according to the course catalogue description.

Lectures were delivered by faculty from both universities, speakers from government institutions and experts in water, energy and food sectors. Together with graduate students from the University of Guanajuato, the binational group jointly studied and explored the contemporary water resource issues of the state, including irrigation methods.

“A lot of their practices for irrigation are really inefficient,” Entwistle said. “They do a lot of the gravity and furrow irrigation. Since it’s a similar climate to Texas, most of it gets evaporated instead of infiltrated into the soil.”

However, for many of Mexico’s rural farmers who lack even proper waste disposal systems, the financial investment required for installing drip or sprinkler irrigation is simply too high, Entwistle and Camilo Bastidas, a graduate student in WMHS, wrote in the The Drop, the WMHS newsletter.

Efforts to introduce new irrigation or farming methods in Mexico are often met with resistance by the rural communities that persist throughout the countryside, said Jason Murray, TWRI graduate research assistant who also attended the course. Farmers who grow crops based on tactics used by their family for generations typically are suspicious of what they see as new, unreliable approaches to farming, he said.

“They don’t really understand that if you use less water, you’re optimizing both how much water you have to pump and you’re going to get the same amount of crops,” Murray said. “But they’ve been doing it the same way for so long, and they don’t actually pay for the water, so they don’t see an incentive not to use the water.”

Murray said the relationship between the federal government of Mexico and the water management of its states may be part of the problem in the rapid depletion of resources.

Kayla Rohrbach and Jessica Foster, graduate students in WMHS and the Texas A&M School of Law, respectively, wrote in The Drop that water is considered national property under Mexico’s Constitution. Individuals requesting water rights must apply for a permit through CONAGUA, the national agency that has control over administering rights. All permits have already been allocated, so water transfers occur by private transactions through a water bank with minimal oversight or records.

“They are greatly using more groundwater than they need,” Murray said. “The groundwater storages is being rapidly decreased as a result.”

Texas also relies heavily on the use of groundwater resources, but unlike Mexico, there are legal limits on groundwater withdrawal to conserve and monitor aquifers, Entwistle said.

“I think the difference in Texas is that there’s been a greater emphasis on conservation,” she said. Incentives offered by Texas to increase conservation practices include offering grants and loans to local stakeholders and educational programs through agencies such as the Texas Water Development Board.

Educational outreach efforts in Guanajuato are more challenging to implement, Murray said. Training seminars and open forums are held for farming communities who lack access to the internet or television, but the disconnect between government and rural citizens can impede advances in conservation.

Murray said many rural communities in Guanajuato, however, practice reusing their resources. “If they take a shower, they’ll catch all their water and reuse it to wash their clothes or water their garden,” he said.

Wastewater irrigation is a practical solution for many rural communities that lack treatment plants or septic systems, according to The Drop contributors Anna Gitter, TWRI graduate research assistant, and John Roberts, WMHS graduate students. The domestic waste serves as an affordable fertilizer by providing nutrients to the soil, and applying wastewater to farmland prevents it from entering local water sources and helps improve water quality.

The primary issue with using wastewater is the human health concern of coming into contact with bacteria, Entwistle said.

“You’re seeing a lot of bacteria and other water issues that are going into the plants and into the soils,” she said. “Then you see not only the farmers who are handling the soil and growing the plants contracting these diseases or infections, but it can also then get sent to the consumer as well.”

Murray agreed that using raw wastewater can have an adverse effect on the health of local communities. “People tend to get sick more often with gastrointestinal stuff, because of the E.coli.”

Local cooperation between rural communities can improve water quality and foster economic efficiency. Farmers in proximity of one another sometimes jointly purchase a tractor or irrigation tool and share it among their communities, Entwistle said.

“They can be more efficient without having to take all the economic burden on themselves,” she said. “That’s one way they start working together.”

Both Entwistle and Murray said the study abroad experience led to not only an examination of Guanajuato’s water management systems but a deeper understanding of Texas’s own fundamental water quality and management issues. While both regions experience similar climatic conditions and resource problems, management practices and efforts to address them differ based on government ideology.

Murray said the experience helped him to see the importance of education for proper resource management. “Taking care of your resources is important,” he said. “And just because you have it, doesn’t mean you should use all of it.”