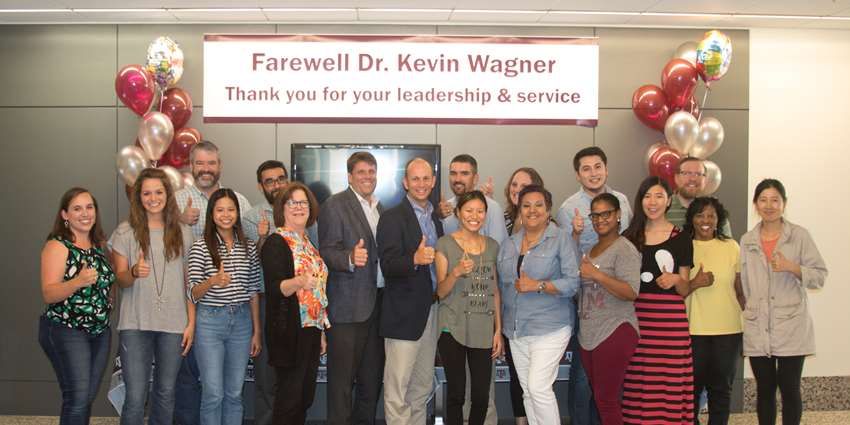 As the center’s director, he will work with faculty from 11 academic departments at OSU, including the Division of Agricultural Sciences and Natural Resources’ nine departments, Extension experts and other universities throughout the state to help address the state’s critical water resource issues. He will also serve as the Thomas E. Berry Professor of Integrated Water Research and Management and as an associate professor in the university’s Plant and Soil Sciences Department.

Wagner, who served in various positions at TWRI for 12 years, had a tremendous impact on advancing watershed planning and water quality issues in the state, according to Dr. John C. Tracy, TWRI’s director.

Tracy said Wagner has also increased TWRI’s engagement with the water resources community across Texas and the nation during his time at the institute.

“Dr. Wagner was hugely responsible for the institute’s increased work with state water agencies, and as a result, the institute and stakeholders in watersheds throughout the state were able to make significant progress in addressing water quality impairments,” Tracy said. “He also provided effective leadership and administration of the institute’s numerous water programs.”

“Dr. Wagner has been a fundamental partner to TSSWCB for the past 12 years,” he said. “Through this partnership, there have been multiple initiatives developed and implemented to address water quality issues across the state.”

For example, Helton said, TSSWCB worked alongside Wagner and others to develop the Texas Bacterial Source Tracking Library, making it one of the first of its kind.

The library, a joint program of TWRI, Texas A&M AgriLife Research and The University of Texas Health Science Center at Houston School of Public Health in El Paso, is used to identify, and also rule-out, significant sources of E. coli pollution in watersheds.

“This library will continue to be used as a tool for future watershed planning efforts,” Helton said.

Wagner has also led The Texas A&M University System’s work with the Ogallala Aquifer Program(OAP), a research-education consortium finding solutions to declining water availability from the Ogallala Aquifer in the Texas High Plains and western Kansas. The consortium is led by the U.S. Department of Agriculture’s Agricultural Research Service (ARS) and partners with three other universities.

“Dr. Wagner has been an inspirational leader guiding the Texas A&M AgriLife Research and Texas A&M AgriLife Extension Service portion of the OAP,” said Dr. David Brauer, OAP’s program manager and a research agronomist for ARS. “Dr. Wagner’s leadership was responsible for the OAP receiving an award for excellence from the U.S. Secretary of Agriculture.”

Wagner said he has greatly appreciated his time at TWRI and believes his work at TWRI has prepared him to lead the Oklahoma Water Resources Center.

“I am going to miss all the staff at TWRI as well as the water resource professionals throughout Texas who I was able to work and collaborate with over the last two decades,” he said. “I do look forward to using all the knowledge and experience gained here to lead the center and enhance collaborations in the region.”