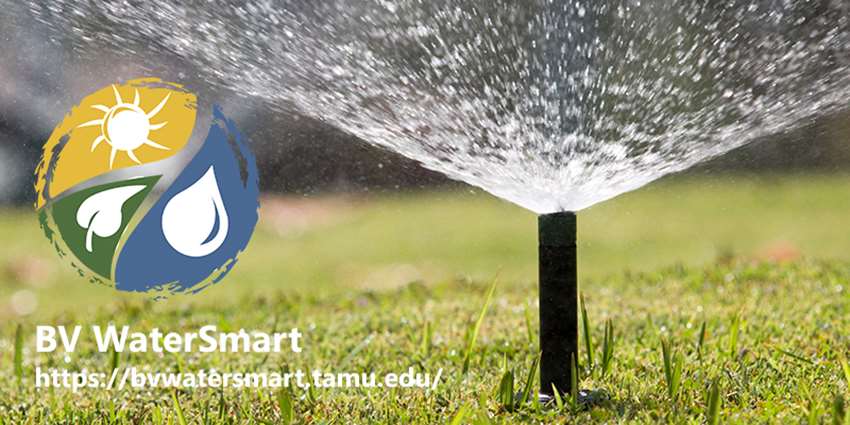 Some 5,500 College Station single-family residences have reduced outdoor water use by an estimated 320 million gallons from 2010 to 2016, through participating in water conservation research and educational programs conducted by a team of Texas A&M University and city of College Station staff.

“That amount of water reduction is enough to provide 1,000 households of four water for a year,” said Dr. Ronald Kaiser, professor of water law and management in Texas A&M’s Recreation, Parks and Tourism Sciences Department and lead for the study. He said the study results do not include gallons of water used in 2011 because of that year’s drought.

The educational programs consist of five interventions or strategies designed to change the behavior of large outdoor water users, Kaiser said. These interventions include a network of Brazos County rainfall stations, a website, weekly emails with watering recommendations at a neighborhood scale, water seminars for College Station homeowners and homeowner irrigation check-ups by water specialists.

In College Station, as in many communities across the country, nearly 50 percent of single-family residences' annual water use is for outdoor watering, Kaiser said. Residents tend to run sprinklers even after rain provides enough water needed for the turf, or they run the systems too long or too often, or have poorly designed or leaky sprinkler systems.

“Many set up their sprinkler systems and then forget about them,” Kaiser said.

In part of the program funded by the city of College Station, Kaiser said the team worked with the city to identify the 5,500 biggest water users, who make up 20 percent of the city’s total residential customers but 40 percent of the residential water use. Within that group, the team, specifically Khedun and Lewis, examined the lawn size, evapotranspiration and rainfall to determine outdoor water budgets, or how much water homeowners should be applying to their landscape.

“We have sent out these water budgets since 2012 to 5,500 homeowners at the end of the year,” he said. “The number of people who are massively overwatering has dropped dramatically. Now we only do water budgets for under 3,000 residences.”

Once residents are within the recommended water budget, they do not receive notifications anymore, Kaiser said.

The Brazos Valley Groundwater Conservation District (BVGCD) funded the program’s website, BV WaterSmart along with the majority of the rainfall stations. The website displays information from rainfall stations throughout Bryan, College Station, Wickson Valley and Wellborn and provides weekly detailed water recommendations. The recommendations are based on rainfall amounts in each neighborhood, evapotranspiration measurements and advice from turf scientists and licensed irrigators, Kaiser said.

Alan Day, BVGCD general manager, said the district’s Board of Directors realized the opportunity to save water used for lawn irrigation and wanted to be part of the project.

“The board knew all that was needed was to provide the funding and to go at the project with a ‘we will be successful’ attitude. BV WaterSmart is already paying dividends,” Day said.

To make the weekly watering recommendations more precise, the team established 17 additional rainfall stations with wireless rain gauges throughout the Brazos Valley. The Texas Center for Applied Technology, part of the Texas A&M Engineering Experiment Station, stores the data and translates it into useable information.

In addition, the website has explanatory videos on area water sources, water conservation and lawn irrigation sprinkler systems; and information on lawn diseases and treatment.

Residents in the Brazos Valley can also subscribe on the website to receive weekly emails with watering recommendations for their neighborhood.

“Currently 390 users have signed up for Monday morning emails that provide watering recommendations based on rainfall for the past week,” Kaiser said.

He said a random sample of 30 people who receive the Monday emails reduced their water use by 1 million gallons from 2015 to 2016 by following the water recommendations.

“Our hope is to get more people signed up for the emails, because these weekly recommendation save homeowners and the city water,” Kaiser said.

“One customer initially was skeptical of the watering recommendations, but has been happy with the results,” he said. “She said, ‘By following the recommendations, we’re using less water than we did last year, and our lawn looks better than our neighbors’ lawns.’”

Nations conducts free sprinkler system check-ups for College Station customers to teach them how to operate their sprinkler system efficiently and learn what is a reasonable amount of water for their landscape. The check-ups are advertised through utility bill inserts, irrigation seminars and water budget letters.

“We read the meter before and after the checkup, so customers learn how much water their sprinkler system uses and how much of their monthly water bill is for landscape watering,” she said.

Nations said College Station has completed over 800 irrigation checkups since beginning the program in 2010.

“We get some referrals from customers who are so pleased they tell all their neighbors,” she said.

Not all the residents participating in the check-ups needed to have their controllers adjusted, Nations said, but for the approximately 200 customers who made adjustments, those residents decreased water use by 12 million gallons over three years.

As part of the program, Smith, Lewis and Nations have conducted homeowner sprinkler seminars for the past three years. They give information on how to set sprinkler controllers, how to upgrade existing sprinklers to more efficient options, and how to perform simple repairs to eliminate water waste.

“We still have some users in College Stations who significantly overwater,” Kaiser said. “But through the different components of the program, the team is trying to encourage more water conservation.”