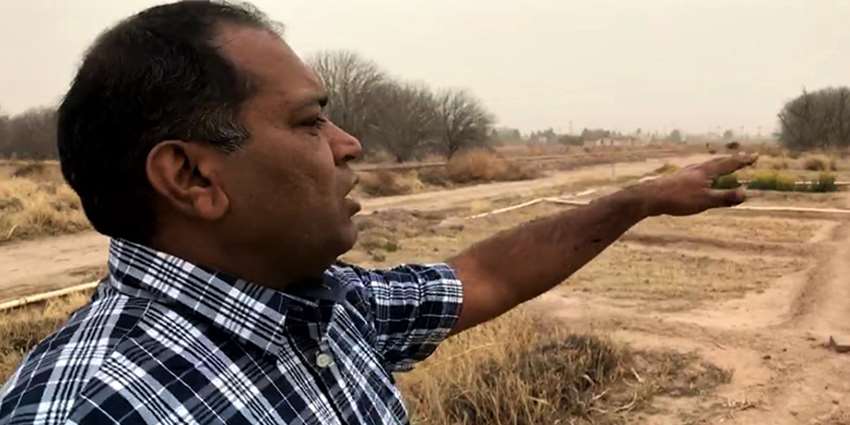 Sometimes inspiration strikes in the shower or while lying in bed falling asleep, but for Dr. Girisha Ganjegunte, associate professor of water resources and salinity management with Texas A&M University’s Department of Soil and Crop Sciences, inspiration came in the form of an article about biotechnology and agriculture.

Ganjegunte began his college education in his native India pursuing an engineering degree in information technology. This program was very competitive, and few students were offered admission. At the time, the economy in India was closed, and some of the only jobs were in this area of study. But Ganjegunte did not take this path.

“I decided to swim against the current,” Ganjegunte said. “After looking at the economy and reading an article about the developments in agriculture, I changed my discipline to agriculture.”

Now Ganjegunte is making a splash by helping the El Paso area cope with dwindling freshwater availability. His research at the Texas A&M AgriLife Research and Extension Center at El Paso focuses on crops that are tolerant to high salinity and treated wastewater reuse and will help conserve freshwater.

Ganjegunte received a bachelor’s degree in agriculture from the University of Agricultural Sciences in Bangalore, India, and continued into a master’s program in soil science at the same university.

After completing his master’s degree, Ganjegunte started working in the environmental management area of the policy analysis division at Tata Energy Resources Institute, now The Energy and Resources Institute, in India. He worked for four years before deciding to get a doctoral degree. He began applying and found a scholarship from The Commonwealth—a voluntary association of sovereign and independent nations. Ganjegunte applied and was the only person chosen out of 80 plus candidates.

“As part of the scholarship, you get to choose your location,” Ganjegunte said. “I chose New Zealand because I was just married, and I thought it would be a good honeymoon.”

In 2001, Ganjegunte received his doctoral degree in soil science from Lincoln University in Canterbury, New Zealand. Soon after, he moved back to India, where he resumed his work at Tata Energy Resources Institute.

“I met my mentor on the first day of the conference, and the next day he offered me a job,” he said.

Although Ganjegunte was successful in India, he took the opportunity to come to the United States to focus on applied research. He worked at the University of Wyoming evaluating grazing impacts on soil and salinity management in agricultural fields irrigated with water produced through natural gas exploration.

In 2006, he joined the El Paso center. The climate and stakeholder concerns in this part of Texas are similar to those of his home state in India. Working in water reuse and salinity research was a natural step for Ganjegunte.

“It was a combination of opportunity and also my interest,” he said.

Ganjegunte’s research in El Paso focuses on salinity assessment and management, water reuse and freshwater conservation. Due to the region’s arid conditions and the proximity of North America’s largest inland water desalination plant, research into the effects of high salinity water and water reuse are very important to stakeholders.

Rain is limited in the area, so reusing water and conserving current resources is vital.

“There is a huge gap between what comes down as a part of precipitation and what goes up as evapotranspiration,” Ganjegunte said.

Evapotranspiration is the transfer of water from the land through evaporation and from plants through transpiration into the atmosphere. The El Paso area typically receives around 8 inches of rain per year but has a possible evapotranspiration rate of around 79 inches per year, according to the TexasET Network. Without other water sources, agriculture would be impossible, Ganjegunte said.

To combat this issue, Ganjegunte is researching how certain crops handle treated wastewater with high salinity. Major crops in the region, including pecans and alfalfa, are salt-sensitive. This creates a problem when treated wastewater or brackish groundwater is used to water crops. As growers prioritize the limited amounts of freshwater to crops that have a long-term investment, such as pecans, crop diversity shrinks.

His work also looks at finding salt-tolerant crops that require less water. He is specifically looking at bioenergy crops, such as sorghum and canola, and how they fare in the region.

“My hope is to develop high impact solutions to help urban and rural stakeholders by managing salt issues and increasing the amount of freshwater available for other uses,” Ganjegunte said.

When Ganjegunte isn’t working on the region’s water scarcity problems, he plays badminton and gardens. He enjoys taking his two daughters to various school and volunteer commitments and helping with their homework from time to time.

For more information about Ganjegunte and his research, visit his pages through the Department of Soil and Crop Sciences and Texas A&M AgriLife Research and Extension Center at El Paso.

Alexandra was a graduate communications intern for the Texas Water Resources Institute, providing assistance to the communications team with the institutes’ publications, including Conservation Matters and txH2O magazine.