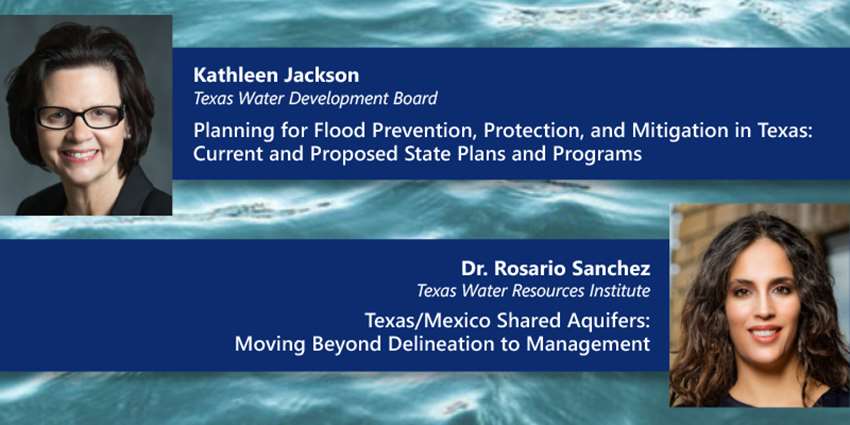 Jackson said TWDB is currently engaged in statewide flood assessment and has a long-term goal of creating a water data hub to help with planning and prevention of floods and other natural disasters.

“Right now, if you're an emergency management official and you're trying to deal with an incident, you have to go to 13 different websites in order to gather and get the information you need,” she said.

Jackson said as part of a recent funding request for a flood program to the Texas Legislature, TWDB is hoping to generate improved and updated mapping and modeling data.

“Everything needs to start with having that good data and that good science to make your decisions with,” she said.

Jackson said TWDB envisions having the data and science all in one place and eventually accessible in real time. These real-time simulations will allow emergency management to tell people how to get out of harm's way, before loss of life.

Jackson said the community wants to engage and understand the process.

“It’s not just enough to have the data available,” she said. “It needs to be in a format that people can readily understand to see and be a part of the decision-making process.”

This water hub will not only help with preventing loss of life and property, but it will also help city officials decide on what projects can be done to help lessen the effects floods can have on cities.

Jackson said real-time simulation will be “a very powerful tool moving forward, not only from a science standpoint but also useful from a design and an emergency management standpoint.”

Jackson also gave an overview of TWDB roles as a state agency.

“We are the data repository for all water data for Texas. Secondly, we are a bank. So we tell folks, we have money to loan right here and you won’t get better interest rates anywhere else,” she said, adding that a large part of TWDB’s purpose is to fund water infrastructure projects across the state.

TWDB is also a technical resource. “We can’t engineer the project for you,” she said, “but we have folks that have worked with communities that can offer up different options.”

In her talk, Sanchez said interest is growing on transboundary aquifers, and it is important to have more data on them as about 40 percent of the world’s population relies on transboundary groundwater resources.

“We don’t know much about them, and we don’t know what the conditions are for the potential for management of these resources,” she said.

Sanchez said at least a dozen cities along the U.S.-Mexico border depend on groundwater for their water.

Currently, only 11 transboundary aquifers are recognized by the two governments, but Sanchez said current research show there could be around 36 potential aquifers and there is no data on 12 of those aquifers.

Through her research, she has identified four priority areas to concentrate on for future water management based on what she calls “transboundariness,” which prioritizes aquifers based on economic, environmental, social, cultural and legal criteria.

For more information and Sanchez’s research on transboundary aquifers, read this paper and this article in Quartz, There’s a time bomb for US-Mexico relations ticking underground.

The Water Daze event was sponsored by the WMHS program, TWRI and the Texas A&M University School of Law.

Bianca was a communications student worker for the Texas Water Resources Institute, providing assistance to the communications team with the institutes’ publications, including Conservation Matters and txH2O magazine.