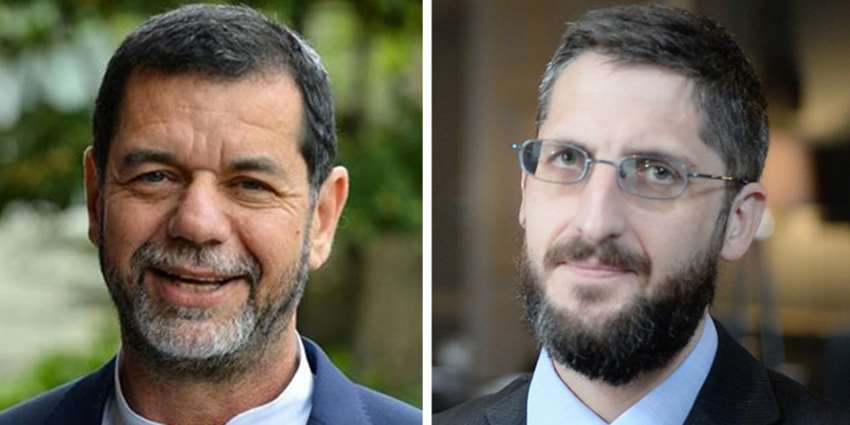 Internationally renowned experts Dr. Francesco Sindico of University of Stathclyde in Glasgow, Scotland and Ambassador (retired) Ram Aviram of BIT Consultancy recently spoke on the difficulties of managing and governing groundwater resources in transboundary aquifers at the 6th Annual Water Lecture Series in Fort Worth and College Station.

A transboundary aquifer is a source of groundwater shared by more than one country.

Sindico, an international environmental law expert, spoke on the context of water, groundwater and global water security and international law guidelines while Aviram, a diplomatic and administrative expert, discussed the diplomacy side of transboundary water.

“If we're talking about global water security, groundwater is super important,” said Sindico at the College Station lecture. “We cannot underestimate the importance of groundwater. Water is much more precious, much more important than any other natural resource.”

With 97 percent of available freshwater resources in the world stored underground, Sindico said in the future, countries will focus more on groundwater.

“Water is under stress because of climate change and increased population,” he said. “We often don't highlight that enough, and it’s incredible the amount of people there are and that will be in the world who will need water.

“Surface water is more polluted, there's less of it, there are problems and there is stress on it, whether we like it or not.

“The reality is that we now know that 592 aquifers exist in the world,” he said, and of those 592 aquifers, there are only six agreements in place between countries.

Sindico said general assembly resolutions are not binding like treaties.

“It is not something like you would think in domestic law that you can enforce and go to court,” he said. “They can have a very strong political influence but from a legal perspective, they are not enforceable.

“These are complex problems,” Sindico said, about addressing transboundary aquifer agreements between countries sharing groundwater. “You cannot think that you're going to solve something so complex as aquifer science and transboundary aquifer management in a matter of days, minutes, hours, months or even years.”

When working with politicians to implement transboundary aquifer management, Sindico said the challenge comes with educating the politicians about aquifers, and then a political cycle will only last a few years. Then the newly elected politicians will have to be educated, starting the process all over to get them on board from a scientific perspective.

“I’ve seen this happen. Countries struggling to understand what the issue was from an aquifer perspective,” he said. “The law and management will require long-term strategies but then again, in the implementation, you bump into this vicious circle of politics just running on a short cycle.

“The conclusion is very much that we are in a vicious circle where science, policy and law chase each other in a way and you're really into a very, very complex maze.”

Continuing the lecture into the governance aspect of transboundary aquifer management, Aviram’s lecture included examples of the water relations between the Palestinian Authority, Jordan, Israel, Syria and Lebanon.

“I’m coming from water diplomacy, which says that we are looking for a process in which we will address the different politics around sharing water and we know that this is a very complex issue,” Aviram said.

Aviram said a long list of factors within each of the countries has to be considered from the hydrology to who is in charge of the water while also addressing which basins are at risk politically.

“When we say ‘risk,’ we refer mainly to the tendency of relations there escalating into a conflictual situation or whether we can expect some sort of cooperation,” he said. Three out of the five locations, Syria, Israel and Lebanon, are at war, but all five locations are interdependent on each other because of the shared water resources.

He cited two examples of interdependence of these countries: one unsuccessful attempt between Israel and the Palestinian Authority to come to a permanent agreement about a shared aquifer and water rights and one successful example of cooperation and sharing of common water resources between Israel and Jordan.

In the Jordan/Israel agreement, Jordan will share water from a desalination plant built on the Jordan side of the Red Sea while Israel will supply Jordan with exactly the same amount of water from wells in the north.

Aviram said there are three things to determine how countries will build their relations: the overall strategic-political interests between the countries, the attitude of the leadership in the basin and technology.

“We are in the 21st century,” he said. “We offer a variety of technologies of all kinds from desalination to different precision agriculture, to different big data analytics in order to reduce leakages in municipal systems.

“So if we have these three and we use it wisely, at the end of the day, we can come to a cooperation rather than escalation.”