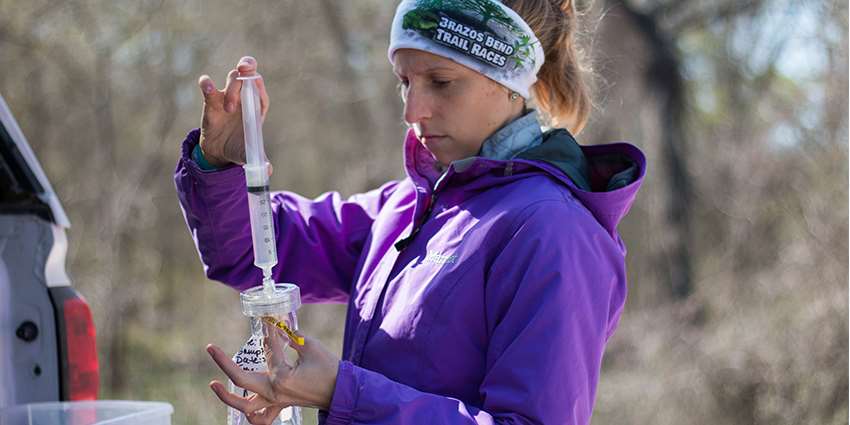 But her passion wasn’t always there. Originally from Seattle, Washington, Gitter spent much of her childhood living in San Antonio and Austin. And though she went on trips to national parks with her family as a child, her love of the outdoors didn’t fully solidify until high school, when she found herself on a two-week backpacking trip in rural New Mexico.

“I was super shy growing up, and my mom said, ‘Oh my gosh, this trip will make Anna come out of her shell!’ And I had never done anything like that before, right? At the beginning, I was thinking, if I fall and break my arm, a ranger will take me back to the camp — any way to get out of it,” Gitter said.

“But after a few days I just fell in love. Being out there in the elements, with a bear going through the camp — it really sealed the deal.”

That love of the outdoors has served her well. She went on to earn a Bachelor of Science in environmental science at the University of Michigan and a Master of Science in water management and hydrological science at Texas A&M. She then spent a year and a half living in Bellingham, Washington, where she interned for the Whatcom Conservation District helping with edge-of-field runoff studies for local dairy farms. In 2018, she returned to Texas to start her doctorate in water management and hydrological science, again at Texas A&M.

It was while working on her master’s degree from 2014 to 2016 that Gitter first began working at TWRI, then as a graduate research assistant.  After returning for her doctorate, she was hired on as a full-time research assistant and has since been managing three projects at TWRI, two of which involve characterizing impaired East Texas rivers.

“Both the Angelina and tributaries of the Middle Neches rivers are impaired for bacteria, so we’re identifying the potential players in that,” she said. “Then we can start working with stakeholders and seeing what we want to do, like creating a watershed protection plan.”

Gitter’s third project at TWRI involves tracking the sources of E. coli and other bacteria in South Texas’ Mission and Aransas rivers.

“We get fecal samples in the field and identify the ‘fingerprints’ of the E. coli. We collect water samples and do the same thing,” she said. “Then we cross-match and see what sources of E. coli are in the water bodies.”

Gitter’s doctoral research also relates to E. coli. She works with her advisors, Dr. Terry Gentry, professor in the Texas A&M Department of Soil and Crop Sciences, and Dr. Kristina Mena, associate professor at the University of Texas School of Public Health El Paso Regional Campus, on a multi-institution water quality project. After Hurricane Harvey, specialists from Texas A&M AgriLife Extension Service, including the Texas Well Owner Network, joined researchers from Virginia Tech and Louisiana State University to develop a database of water quality samples from private wells, many of which flooded as a result of the hurricane. When Gitter started her doctorate, she began using that database to conduct human health risk assessments, specifically quantitative microbial risk assessment, of private wells in Texas.

The research team assesses water quality in part by sampling for a non-pathogenic strain of E. coli, an indicator bacterium for pathogens.

“The specific E. coli strain that we sample for is not harmful to humans. It's naturally occurring in our gut system, and all warm-blooded animals excrete it,” Gitter said. “But it’s an indicator of fecal waste in the water body.”

One of the pathogens of concern from fecal waste is norovirus, a highly contagious gastrointestinal illness-causing virus.

“You can mathematically convert E. coli concentrations in the water to the potential concentration of pathogens like norovirus,” she said. “So that's where I come in to translate those numbers into the health risk for a well owner.”

That’s where Gitter’s ability to be a bridge comes in handy again, this time for communication. Private wells are exempt from the Safe Drinking Water Act, so the responsibility for managing contamination is entirely on well owners.

“If you’re a rural well owner, there are several factors that can increase the risk for contamination, such as having an older well. And with the intensity of these natural disasters that we’re going to keep having, everyone’s going to be affected in one way or another,” she said.

“When a well might be contaminated, we don’t want to just tell someone directly that there is a pathogen in your well water — that can spark fear, and it may or may not be a significant risk. So what is the right way to convey those findings?”

To find the right way, Gitter puts herself in the well owners’ shoes.

“When you do a risk assessment, it’s almost like a story. You set up your real-world scenario and see what the outcome of the story is,” she said. “Imagine I'm a private well owner, my well's been flooded and I'm getting a glass of water. I drink it; unknowingly, it's been contaminated. What could the outcome be? Putting myself in those people’s shoes helps make it feel closer to home.”

That desire to understand and experience things firsthand features heavily in Gitter’s work, even on a day-to-day basis.

“I love being in the field, such as with the work we did with the Angelina River project. It's hot, sweaty and gross work. Until you're on the ground looking, do you actually know what's going on?” she said.

“It’s very easy in this work to just sit behind a computer and pull up data. But it’s important to actually see what the water looks like. I feel like we’ve lost a lot of that connection.”

Gitter, though, seems unlikely to lose that connection anytime soon. She’s not sure yet where she will end up after she graduates in late 2020 or early 2021, but wherever she ends up, she’ll keep bridging the gaps. And it seems likely that she’ll dive fully into whatever she does, sweat, bears, E. coli and all.

“You know, you can talk as much as you want, but until you’ve actually been through something, physically experienced it, you can’t really account for everything,” Gitter said. “I’m pretty open. We’ll see what the future holds. But I’ve got a lot to do before then.”