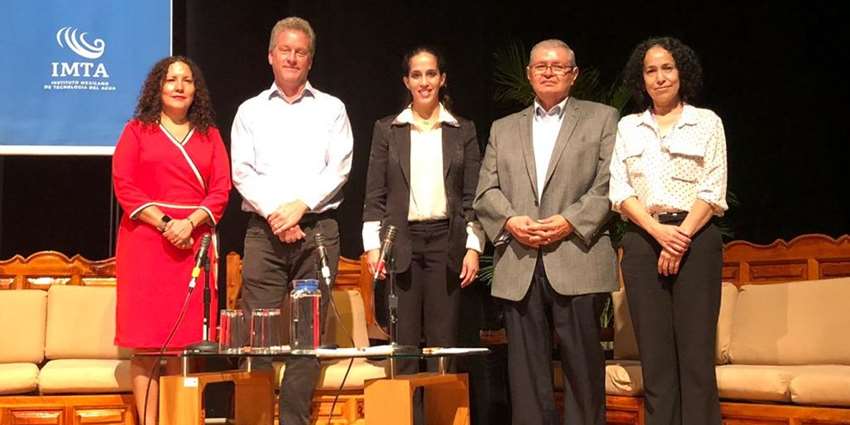 Dr. Rosario Sanchez, TWRI senior research scientist, said the specific agreement allows TWRI to work jointly with IMTA and other academic universities from Mexico and the United States on characterizing the hydrogeological units along the border region and other topics related to groundwater, such as regional groundwater flows and connectivity of aquifers below the Rio Grande.

"Lack of data and differences in methodologies and criteria used by different countries have always been an important issue regarding assessment of transboundary aquifers,” Sanchez said. “This effort sets up a precedent for both countries to jointly assess these differences and work together toward the same objective: to understand, assess and protect our transboundary water resources".

“We are beginning to work with the Southwest Research Institute along with IMTA on data sharing of surface/groundwater interactions in the Edwards Aquifer region near the border with the State of Coahuila near Goodenough Springs,” she said.

The specific agreement is part of a Memorandum of Understanding (MOU) signed by AgriLife Research with IMTA in 2018 and recently ratified by the Mexican government.

Dr. John Tracy, TWRI’s director, said the MOU helped strengthen the cooperation between TWRI, IMTA and other research entities working together on transboundary aquifers between Texas and Mexico. It outlined several areas of cooperation, including developing joint research projects; collaborating on training programs; exchanging visiting scholars to teach or receive training and participate in research; and participating jointly in conferences, seminars, symposiums and other events.

“This MOU represents the first effort at an academic level between Mexico and Texas regarding data sharing, joint research and collaboration over transboundary groundwater resources,” Tracy said. ”It has also opened new windows for binational cooperation between Mexican and U.S. academic institutions as it allows for additional water cooperation efforts that might take place in other states by different institutions.”

The MOU has also has promoted the development of the Transboundary Water Portal to integrate, share and store data related to transboundary surface water and groundwater resources between Mexico and the United States.

TWRI has been working along the border of Texas and Mexico as part of its involvement in the Transboundary Aquifer Assessment Program (TAAP), a U.S. Geological Survey (USGS) project. The project was created by the 2006 U.S.-Mexico Transboundary Aquifer Assessment Act to conduct binational scientific research to develop a comprehensive understanding of transboundary aquifers along the U.S.-Mexico border. TAAP collaborators include the USGS water science centers and water resources research institutes of Arizona, New Mexico and Texas; the International Boundary and Water Commission; stakeholders and Mexican counterparts.