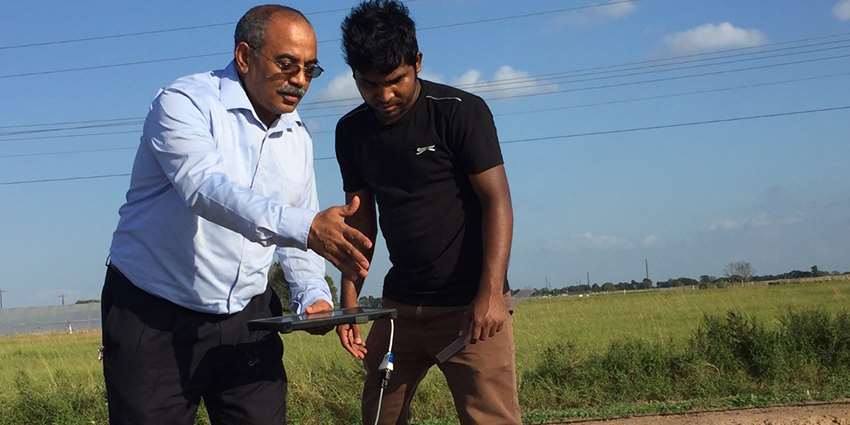 Agriculture relies on water, making water issues inseparable from agronomy. This year, experts in that field honored a Texas water researcher for his outstanding work at the nexus of water, food and environmental security.

In early July, Ali Fares, Ph.D., professor of water security in the College of Agriculture and Human Sciences at Prairie View A&M University, was selected as an American Society of Agronomy (ASA) Fellow and included into the ASA’s 2020 Awards Hall of Fame.

ASA is a 113-year-old professional society with 8,000 members who “help feed and sustain the world everyday” through agronomy. It describes the Fellow award as the highest recognition it bestows to members who have made outstanding contributions in the public, commercial or private sectors to the profession through research, teaching, extension and service.

“It is your colleagues who recognize you,” he said of the selection. “This is a recognition of those who know the value of people’s contribution to agronomy.”

He said it is rewarding to know that what he has been doing in agronomy has been recognized and valued by those who know agronomy best. But he also called it a responsibility.

“Being honored by this recognition is a responsibility to continue on the path of creating value for society.”

Fares’ recent work seeks to help people make better, more informed and more targeted decisions about water use. Many of the projects he’s worked on involve modeling, highlighting the interconnectivity of water to all of human endeavors and trying to grapple with the challenges of a growing population that relies on the same amount of water.

In a multi-institutional effort to address the chronic flooding impacting the Greater Houston Area, Fares and other colleagues are using an integrated approach involving hydrological modeling to evaluate the performance of resiliency measures. These include protection of coastal prairies and adoption of low-impact development strategies that balance environmental needs like water infiltration and groundwater recharge with the reality of an ever-growing urban population and their needs for housing that is safe from floods.

“We can present that as scientists to our decision makers and our policy makers so they can use that information to make the best decision based on data.”

Another of Fares’ projects built on his earlier work of fine-tuning water allocation in different crops. His team calculated the water use of citrus production in different areas around the world. They found that the water footprints of the same crops were wildly different across the different locations due to the unique water, soil and weather situations in those places.

“This is helpful to make a decision, and that is the power of models and modeling,” Fares said. “With that information, we can give people multiple options of how to use water responsibly. How to optimize use. The question right now for us is not really, ‘Can I afford it or not?’ it's ‘What is the best use of the resource?’”

Though most of his work looks to the future, Fares’ teaching is a direct effort to positively touch the future. Fares heads up the agricultural instruction of a National Science Foundation Research Traineeship Program in collaboration with University of Texas-Austin colleagues to teach engineering students who will work in areas related to the sustainability of water, energy and food. This is in part to help students who may not know or understand agriculture to better appreciate the nexus between energy, water and food.

“There is a kind of interesting dialogue between the people who are in all of these areas; how can we come to terms where everyone will be a winner? None of us can take the steak by himself or herself. We have to share it. So, what is the best solution and what are the best terms?”

This of course takes innovation, Fares explained. And a willingness to imagine.

“It's important for science to think outside the box. That's where innovation comes from and that’s where excellence comes from,” he said. “You can dream. You can think about something that might be.”

However, Fares noted that it will take more than innovation and technology to help create resiliency and sustainability, not just in Texas agriculture and cities, but around the world. People need to be reached and inspired as well, he said, and that takes collaboration.

“Having an outreach program telling people about their food and about their water and educating them is really important. I think land-grant institutions like Prairie View and Texas A&M Universities are key in this, and what the water centers, like Texas Water Resources Institute, have been doing is really fantastic,” he said.

“You cannot talk about food security without water security. Promoting and advocating for water causes and training people is very important. Our role is to educate the future professionals, the future decision makers, about these important resources and help them see and make the best decisions based on the right information.”