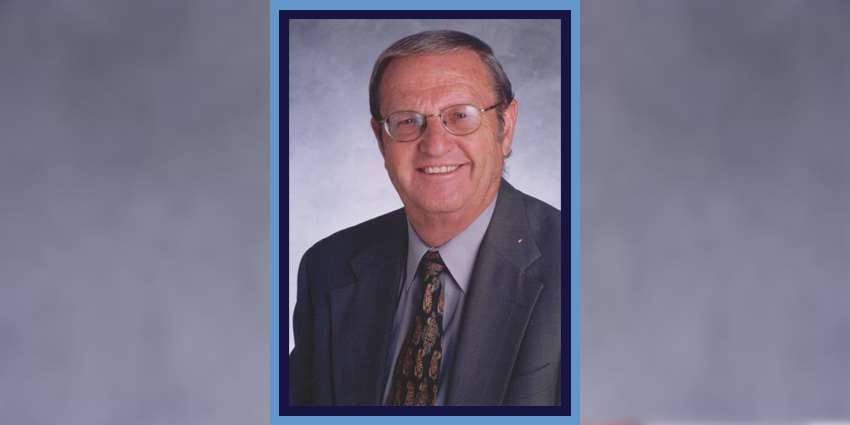 Texas A&M University’s Ron Lacewell, Ph.D., is one of the two 2021 recipients of the Universities Council on Water Resources (UCOWR) Warren A. Hall Medal for lifetime achievement in water resources. That lifetime of work has been a long one, and one specifically marked by strong collaboration with co-winner, Mac McKee, Ph.D., of Utah State University.

“Mac and I have been working together for decades,” said Lacewell, formerly an assistant vice chancellor in Texas A&M AgriLife’s Office of Federal Relations and a retired professor of water resources economics in the College of Agriculture and Life Sciences.

“We are still working together. Just because you retire doesn’t mean you die,” he added with a chuckle.

The two men were jointly nominated for the award by the Texas Water Resources Institute (TWRI) a unit of Texas A&M AgriLife. This was the first time in the award’s history that it was awarded jointly to two individuals for their combined accomplishments.

“It’s always been presented to a single scientist of renown,” Lacewell said. “But I think it is a great thing for UCOWR to acknowledge that working together is synergistic and leads to better results.”

The early years of a lifetime’s work

“The way I got involved in water is that when I was five years old, my folks bought a dryland farm on the high plains of Texas and immediately drilled an irrigation well,” Lacewell said.

He described that early irrigation as elementary, using unpowered hoses to siphon water manually out of earthen ditches into the rows on the farm. But he described his family’s operation as early adopters of more efficient irrigation technology, which saw systems change from siphon tubes to underground tile, to gated pipe, to sprinklers, and finally to drip over his life.

“I grew up with it and it marked me.”

The threats to the Ogallala Aquifer on which Lacewell’s family’s farm depended for irrigation water also marked him. What he saw worried him, and he decided to go to college before deciding whether to become a farmer. He wound up studying the Ogallala.

“I was getting into the research side of water. It was fantastic!” Lacewell said. “I worked with all the water leaders there, the government agencies, a water district, and the result of my thesis was that the water of the Ogallala was going to keep getting more limited.”

With that information, Lacewell opted not to follow in his father’s farming footsteps, but instead to dedicate his career to working with water resource management. In this process, he worked for the U.S. Department of Agriculture as an economist dealing with the benefits of flood control.

After finishing his Ph.D. in agricultural economics at Oklahoma State University, Lacewell returned to Texas A&M in 1970 as an assistant professor. Once there, he began working closely with TWRI.

Meeting Mac and collaboration through UCOWR

Lacewell and McKee met through UCOWR. Lacewell came to UCOWR through TWRI and McKee through the Utah Water Research Laboratory, which houses Utah’s state water resource research institute, the Utah Center for Water Resources Research. Both men had served on the board of directors and served as president and got to know each other through common issues.

“Utah is not Texas, so one of the things that drew us together is the difference in the two,” Lacewell said. “It was fun to talk about. How Utah addresses some topics and how Texas addresses some topics. The two fit together really well and we were able to generate a lot of different ideas.”

While they were working together at UCOWR, they became drawn into several controversial water topics, Lacewell said.

“We fought some battles together,” he said. “He and I renegotiated one of the contracts for UCOWR. It ran out while I was president and he was on the board. We had to go to southern Illinois and sit down with the chancellor and negotiate another five-year contract. And you get pretty close when you do something like that.”

McKee retired in 2019 after having served over 16 years as the Utah Water Research Laboratory’s director. He was the laboratory’s longest-serving director in its history. During his tenure, he did a lot of work with using remote sensing in water and has served in advisory roles in international peace talks and human rights efforts related to water.

John Tracy, Ph.D., TWRI director and past UCOWR president, said both Lacewell and McKee have left their mark on both UCOWR and the field of water resource management.

“They have been not just helpful for the organization, but they have been well known in their water resources research field and have been the mainstay of helping UCOWR evolve and develop,” he said. “Their work went well beyond Texas and Utah. A lot of people know and have been affected by and really benefited from Ron and Mac’s work.”

He highlighted one of many examples: unmanned area vehicles, UAVs, in water and agricultural work.

“Mac and Ron have been out on the forefront of their professions, Ron in terms of resource economics and Mac was one of the first people really pushing the use of UAVs in the early 2000s,” Tracy explained.

“There is a strong link in water resources and use of UAVs in agricultural systems between Utah and Texas. If you thought about it geographically, you’d wonder why it exists, but it’s because of this strong cross communication and collaboration between Mac and Ron.”

The use of UAVs is invaluable when it comes to water research, particularly with “big data,” remote sensing and water modeling. For example, researchers in a current collaboration between University of Texas at El Paso and the Texas A&M AgriLife Research Center at El Paso have developed novel ways to use UAVs to track the creation of greenhouse gasses related to irrigation in arid conditions.

Both Lacewell and Tracy praised UCOWR’s move to recognize the value of a lifetime of collaboration with the Warren A. Hall Medal.

“UCOWR stepped outside tradition and setting a new course,” Tracy said. “We all need collaboration and it is very important to recognize individuals who are able to work beyond themselves to work with others and maybe do something greater.”