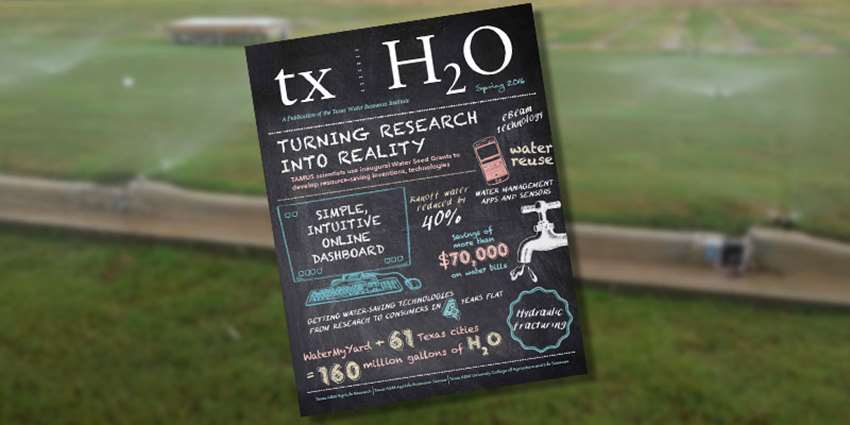 The Texas Water Resources Institute has published the spring 2016 issue of txH2O magazine, featuring research projects from throughout The Texas A&M University System (TAMUS) funded by the inaugural round of water research seed grants.

The first round of the program resulted in more than 150 faculty working to submit 64 research proposals. Of those, seven were funded and completed during fiscal years 2014 and 2015. The program’s second round has just begun, with more than 50 research ideas considered and seven selected for funding over fiscal years 2016 and 2017.

This issue of txH2O provides an overview of the first set of projects, which address everything from using residential water-use data to help consumers, to equipping High Plains cotton farmers with the technology needed to perfect irrigation amounts and timing.

“I believe this water seed grant program has the potential to bring about significant and impactful changes to Texas’ water management, and I look forward to seeing it evolve even further to better help meet our state’s water needs,” said TWRI Director Dr. John C. Tracy, in txH2O. “And, I applaud the Texas Legislature in being forward-thinking and committed to addressing this issue.”

txH2O is published twice a year and is available on TWRI’s website, on isssuu.com and as a PDF. Subscribe to the magazine for free and never miss an issue.