Results show why water well testing in Texas is important 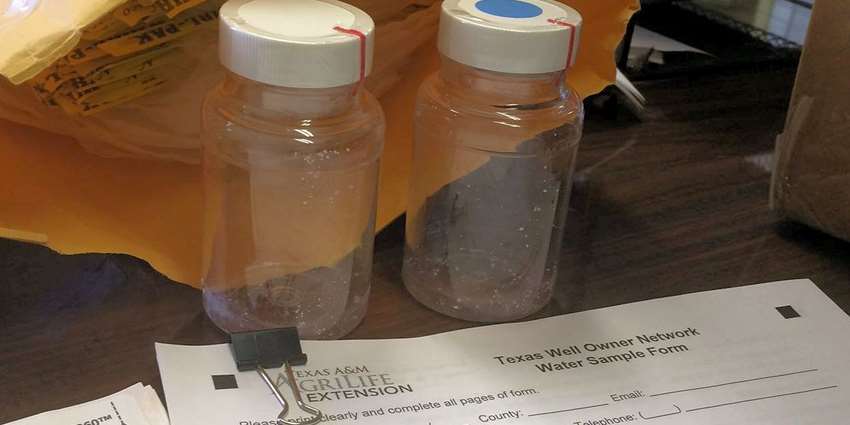 “Through these screenings, we identified several contaminants that could potentially cause illnesses or other problems for the private well owners,” said John Smith, Texas A&M AgriLife Extension Service program specialist.

Healthy South Texas is an initiative of AgriLife Extension and the Texas A&M University Health Science Center to reduce preventable diseases and their consequences throughout the region.

More than 112 well owners in those counties brought their samples to five Texas Well Owner Network well screening events held in August. The samples were then screened for common contaminants, including E. coli bacteria, nitrates and high salinity. Samples were also screened for arsenic if the owner’s well is used as a drinking water source, Smith said. Of the 112 samples, 55 samples or 49 percent identified a contaminant in the water that could cause health issues.

Of the 105 well samples screened for nitrate-nitrogen, 50 samples or about 48 percent were above the 10 parts per million maximum contaminant level, Smith said.

“Water with nitrate-nitrogen at levels of 10 parts per million is considered unsafe for human consumption,” Smith said. “Nitrate levels above 10 parts per million can disrupt the ability of blood to carry oxygen throughout the body, resulting in a condition called methemoglobinemia. Infants less than 6 months of age and the elderly are most susceptible.”

She said the presence of E. coli in water indicates that waste from humans or warm-blooded animals may have contaminated the water. Water contaminated with E. coli is more likely to also have pathogens present that can cause diarrhea, cramps, nausea or other symptoms.

Of the 75 samples tested for arsenic, 14 or about 19 percent, were above the maximum contaminant level with six samples containing more than 100 parts per million of arsenic, Boellstorff said.

Long-term consumption of arsenic in water is associated with diabetes and increases the risk of skin cancer and cancer in the liver, bladder and lungs. Chronic exposure to arsenic may also lead to gastrointestinal irritation and cardiovascular disease.

In addition to the screenings, four meetings were held to distribute and interpret the results to the well owners.

“These meetings are required for owners submitting samples,” Smith said, “because besides giving out the results, we use this time to teach well owners corrective measures for identified problems and to improve their understanding of private well management practices, such as plugging or capping abandoned wells or removing hazards from their well house.”

“According to pre- and post-program tests given to participants, the owners’ understanding of these and other practices increased from 1.6 points to 4.2 on a 5-point scale and a very high percentage said they will implement the suggested practices," Smith said.

“We are very pleased with this increased knowledge on the importance of getting well water tested and practices to manage the wells,” Boellstorff said.

“Private water wells should be tested annually,” she said. “And private well owners are independently responsible for monitoring the quality of their wells so these screenings and educational sessions help them understand and care for their wells.”

To learn more about programs offered through the Texas Well Owner Network or to find additional publications and resources, go to twon.tamu.edu.

Support for the Texas Well Owner Network is provided through Clean Water Act nonpoint source funding from the Texas State Soil and Water Conservation Board and the U.S. Environmental Protection Agency and the Healthy South Texas initiative.