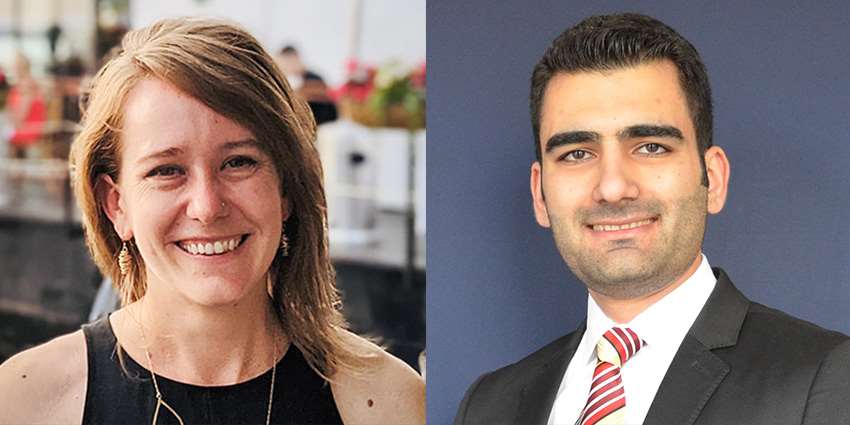 Both Randle and Heidari will be joining a growing interdisciplinary team at the Texas A&M AgriLife Center at Dallas, also called the Dallas Center, as part of the Urban Water Innovation and Sustainability Hub (Urban WISH). Urban WISH seeks to address current and future water security and sustainability challenges in the Dallas-Fort Worth metroplex and beyond.

In keeping with the interdisciplinary nature of Urban WISH’s work, Heidari and Randle come from different academic backgrounds.

All three of Heidari’s degrees are in civil engineering: a bachelor’s degree from Sharif University of Technology, a master’s degree from Virginia Tech and a doctorate from the University of Illinois at Urbana-Champaign. After finishing his doctorate, he worked at the Dallas Center as a postdoctoral researcher with Fouad Jaber, Ph.D. There, Heidari’s work focused on localized flooding in Dallas, how it will be affected by climate change projections and how green infrastructure can help address it.

In contrast, Randle was first drawn to studying water after reading Marc Reisner’s Cadillac Desert as an undergraduate English major at Williams College. She went on to get a master’s degree in environment, society and development from the University of Cambridge and a doctorate in environmental anthropology from Yale University. In both her doctorate and two subsequent postdoctoral positions, she studied southern California water issues, including Los Angeles’ shift towards using more sustainable water sources, such as recycling wastewater and capturing and storing stormwater.

Both Randle and Heidari are excited for the prospect of asking new questions about urban water issues.

“One of the reasons that I was interested in this position is that it was research-oriented,” Heidari said. “Whenever I hear about a new subject, I'm thinking, okay, what are the intellectual questions that can be answered in this topic?”

Heidari and Randle will start learning about those questions — and possible answers — in a series of workshops that Randle described as the “meat and potatoes” of the Urban WISH team’s current focus.

Through the workshops, the Urban WISH team will learn more about the challenges faced by different stakeholder groups. The first workshop will bring together local, state and federal government entities, the second will be with nonprofit organizations, and the third will be with academics. The fourth workshop will bring everyone together to synthesize knowledge from the previous workshops.

The Urban WISH team wants to understand “what knowledge would be useful to produce for a diverse range of folks,” so future research can help stakeholders “realize their goals, while also producing important new knowledge,” Randle said.

Both research scientists will also bring their unique expertise to other upcoming projects at the Dallas Center.

Heidari will use hydrological modeling and other computational methods to understand climate change and extreme weather impacts and solutions in the Dallas-Fort Worth metroplex.

“In Dallas, in the last seven years, we had at least two very major storms in the range of 100-year events,” Heidari said. “These rainfall events are becoming more frequent and more intense, and there should be solutions to mitigate the impacts and have more resilient cities.”

One project Heidari is working on will use crowdsourced data from navigation apps to understand where flooding is worst and then validate that data with hydrological models. He’s also working on downscaling national climate change projections for smaller areas — such as the Dallas-Fort Worth metroplex — to assess their impacts on local weather and infrastructure.

“I want to understand how these urban systems will react to flooding, what solutions we can have to mitigate flooding, and how we project that flooding to be, given different climate change projections,” he said.

Randle, meanwhile, will use social science research methods to study a variety of water-related issues. She is currently developing funding proposals focused on the social and political challenges of developing new water storage infrastructure, an ongoing challenge for the Dallas-Fort metroplex.

“A big piece of my role on the team is gathering data about and informing our understanding of stakeholders and how they’re understanding the different water arrangements,” she said.

“It’s very easy in the universe of water to think that technical problems are straightforward. But they are also embedded in cultural systems, political economy and legal structures,” she said. “What if we put an individual in their context? How do problems and solutions look different if you do that?”

In their upcoming research, Heidari and Randle are looking forward to pulling together the Urban WISH team’s different skillsets and perspectives to develop useful, holistic solutions.

“It's exciting to think of what we might do together and how it might provide ways to get out of dead ends in understanding and contributing to a more resilient urban environment,” Randle said.

Heidari agreed, emphasizing that working across disciplines will allow the team to better support stakeholders in the Dallas-Fort Worth metroplex and beyond.

“Whatever idea we have, we want to understand both from an engineering standpoint and from a social standpoint how that idea can materialize into concrete and actionable research questions,” he said.

Heidari said that bringing all of these skills together in one TWRI team at the Dallas Center is “a new experiment.” That’s part of what makes him excited for everything the team will be working on.

“The work has a start-up nature to it,” he said. “And that’s very interesting, because we can be part of something very big.”