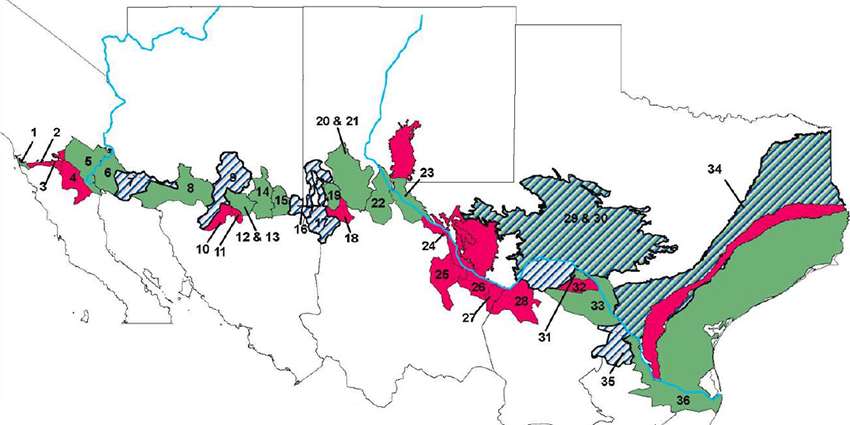 Underneath the border of the United States and Mexico lie transboundary aquifers. Little is known about most of these aquifers or how the two countries can mutually manage these waters.

According to Sanchez, major challenges for the assessment and potential management of transboundary aquifers shared between Mexico and the United States include

The Texas A&M team is focusing on enhancing the quantitative and qualitative understanding of the priority aquifers between Mexico and Texas (Hueco and Mesilla Bolsons), as well as creating a framework for identifying and assessing the condition of all transboundary aquifers on the Texas-Mexico border.

As of year two of the project, the team completed several of its objectives, including

For the rest of the project, the team will:

Sheng said groundwater flows across the border and doesn’t recognize the political boundaries and may change its flow direction when it is pumped heavily on one side.

“So understanding of the hydrological conditions and cooperation among water users on both sides of the border is critical for best management practices,” he said.

As part of its objective to develop protocols to identify transboundary aquifers, Sanchez said the team examined the concept of transboundariness to prioritize the aquifers.

Sanchez said transboundariness identifies and prioritizes transboundary aquifers using other variables in addition to their mere physical boundaries. It uses socio-economic and political criteria, such as the level of attention that an aquifer has received, population, groundwater level dependency and other factors to identify the vulnerability of transboundary groundwater resources.

“The transboundariness approach attempts to measure precisely those other variables,” she said. “This concept of transboundariness has the potential to offer an alternative approach for assessing aquifers where two or more international political jurisdictions meet and where the variable conditions of the overlying communities and its linkages with groundwater can actually be measured.”

“What evidence and information do we need to consider for an aquifer that underlies a border region to be defined as transboundary?” Sanchez asked. “Answers vary, and it is precisely that variation that transboundariness is able to identify and measure.”

Sanchez said the expansion of the methodology used to assess transboundary aquifers across Mexico and Texas to the rest of the border between Mexico and the United States will offer the only criteria ever developed between the two nations.

The TWRI project team has created a website, Transboundary Water Portal, to integrate and share data related to transboundary surface water and groundwater resources between Mexico and the United States.

The project team has also published several papers on this concept, including:

The team has also developed a Special Featured Collection on transboundary aquifers of the Journal of American Water Resources Association with an expected publication in the fall of 2019.

In addition, the team has participated in numerous conferences, including the TWRI-hosted American Water Resources Association Conference 2018 on Transboundary Groundwater Resources.

This material is based upon work supported by the U.S. Geological Survey under Grant/Cooperative Agreement No. G17AC00440.