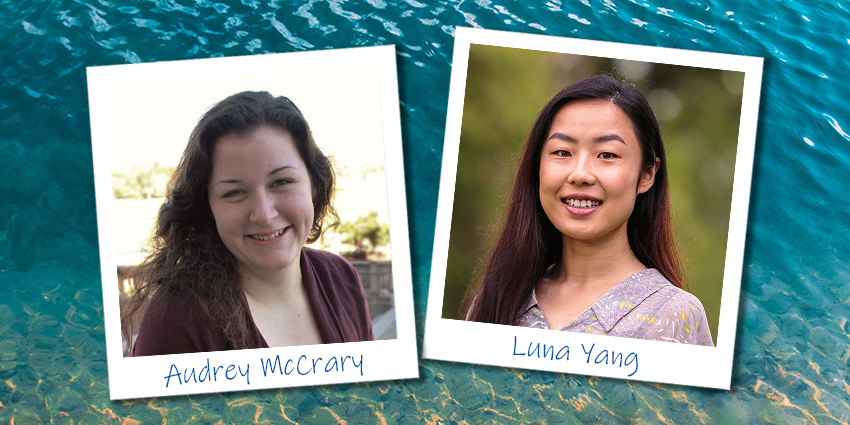 The Texas Water Resources Institute team has grown a lot in the past year, and it’s still growing. TWRI’s Luna Yang transitioned from being a graduate research assistant to being a full-time research specialist earlier this year. More recently, Audrey McCrary joined the TWRI team as a program specialist.

Both Yang and McCrary work on developing watershed protection plans and water quality improvement initiatives. Part of Yang’s work is using geographic information systems (GIS) to perform spatial analysis and using the programming language R to analyze historical water quality data. She also does water quality monitoring and manages projects, such as one on Brushy Creek in the Round Rock area. McCrary will be working on projects along the Gulf Coast and in East Texas, focusing on implementing conservation-minded principles and practices on agricultural lands.

Yang was first drawn to the idea of studying water when she was growing up in Ürümqi, a city in northwestern China. In the mountainous desert region, it wasn’t uncommon to have little residential water for a week at a time in summer, because nearby rivers were snowmelt-fed and there was little rain. This inspired Yang to want to work in water resources.

“I just had the dream to make a difference. The ultimate goal is to be able to give back to communities and raise awareness of how important it is to make these resources sustainable,” she said.

That dream led Yang first to a get bachelor’s degree in hydraulic engineering from Hohai University in Nanjing, China. Wanting to go in a more interdisciplinary direction, she then went to Texas A&M University for her master’s degree in water management and hydrological science. She is currently working on her doctorate in the same subject. While first studying at Texas A&M, she became a graduate research assistant at TWRI, focusing on GIS.

McCrary, meanwhile, grew up in a military family stationed in several coastal states. After attending Texas A&M University for her bachelor’s degree in wildlife and rangeland management, she went to Mississippi State University to get a master’s degree in wildlife, fisheries and aquaculture. For her graduate thesis, she studied the effects of conservation practices on Mississippi State research lands and surveyed extension agents about water quality, conservation and their training needs. It was that work that set her on her current path of working with stakeholders.

“I think like most wildlife biologists, I knew the people side was there and it was necessary, but it was kind of scary. So my master’s really forced me to grow into that field, and now I really enjoy it,” she said.

After graduating, McCrary worked for the U.S. Department of Agriculture Natural Resources Conservation Service (NRCS) as a certified conservation planner in Caldwell, Texas. She said that coming back to Texas A&M to work at TWRI feels like coming full circle.

At TWRI, both Yang and McCrary will be working with local communities. The Brushy Creek monitoring project will be Yang’s first as a project manager, and she’s excited to find collaborative solutions with stakeholders.

“I want to see how people think, how they care about the water, their perspectives. I’m pretty excited about that,” Yang said.

McCrary agreed, recalling a technician she met while working with NRCS who had been working in the area for 50 years.

“The biggest lesson I took from that technician was that it's not about the ponds he built. It's the fact that he knew people and people knew to come to him for help,” McCrary said.

“It’s not just our job to conserve resources. It's our job to really come into these communities and hear from them and work with them and make long-term relationships.”

Yang said working with stakeholders is vital for making real change on the ground.

“What I do in an office — the maps I make and the data I analyze — that doesn’t really mean too much if there’s no traction from the community. What’s the point of making a plan if nobody’s going to work on it or implement it?” she said.

McCrary and Yang are looking forward to connecting their technical experience with community work.

“Doing water quality work and agriculture is in the interdisciplinary zone. The more you learn about the people side, the more conservation we can get on the ground. And you still need to know the hard science behind the water quality,” McCrary said.

“I’m really happy to be in a position where I can learn something new every day.”